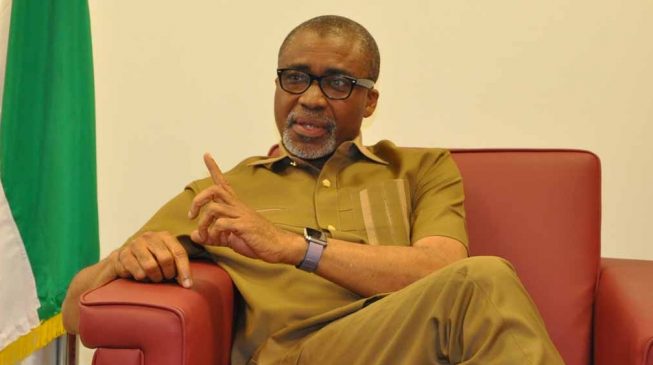 In an interview with PUNCH, Abaribe said Oshiomhole is not in the position to dictate on how senators will choose their leader because he is not a member of the national assembly.

Ahmad Lawan, senate leader, has been endorsed by the All Progressives Congress (APC) for the position of senate president.

However, the Peoples Democratic Party (PDP) senator said the APC chairman is making life difficult for whoever he is promoting.

He said Oshiomhole’s statements is “making the PDP members to think twice about whoever the APC is bringing up.”

“I had cause at one time to advise Oshiomhole not to be so garrulous in his statements and I think he hasn’t learnt any lessons. You don’t choose for us or determine for us who becomes what in the senate,” he said.

“I think because he has never been a member of the parliament, he just doesn’t want to take advice from those who have been in the national assembly.

“Even the senate president cannot sit down and say ‘I give you this ABCD’. It never happens. There is always a committee that is called the selection committee

“Oshiomhole is de-marketing his party and actually making the PDP members to think twice about whoever the APC is bringing up. This decision, as I said, will be done on the floor of the senate.

“Like senator Ali Ndume has earlier said, it is not constitutional for somebody to wake up and begin to talk to you from outside that he wants to determine what happens in an exclusive club where the person is not a member.”

When asked if PDP will sponsor a candidate, Abaribe said: “Well, I can say that all of us are consulting. It is not the APC only that is consulting; we are also consulting.”