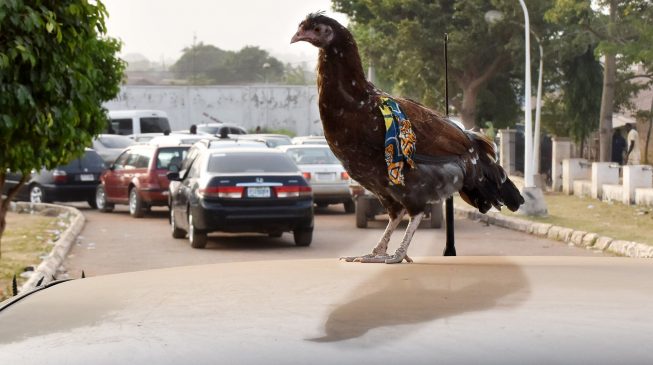 The mere mention of ‘fuel subsidy’ in Nigeria raises ears; add ‘removal of’ as prefix to the two words and there you have chaos.
Despite being 5,418 miles away from Lagos, reporting the World Bank/International Monetary Fund meetings for TheCable from Washington DC, I still felt the sting of the brief fuel scarcity episode last week.
IMF and subsidy
As usual, journalists from Nigeria and delegates joined up with colleagues from across the world for the meetings in Washington DC.
Government and business owners use these bi-annual meetings to hold talks in a bid to go back home with favourable deals in their bags.
At one of the press conferences that heralded the start of the meetings, the IMF gave its usual advice that Nigeria should do away with fuel subsidy and make efforts to shore up non-oil revenue.
Abebe Selassie, head of IMF’s African department, would later explain the reason for the advice.
“Who are the people that own cars in Nigeria? It’s the rich. Who are the people with multiple cars in Nigeria? It’s also rich people. So what we are saying is that the government is helping rich people reduce the cost of using cars by keeping fuel subsidy,” he said.
I know you may argue that it’s not only rich people that use cars in Nigeria but anyone who can afford to own a car is certainly not part of the 91 million Nigerians who live below N693.50 a day.
Zainab Ahmed walks in
On the ground floor of the second building of the IMF headquarters, journalists from Nigeria had a short session with Zainab Ahmed, the minister of finance, and asked her opinion on IMF’s fuel subsidy removal advice.
Responding to the question, she said: “The advice from the IMF on fuel subsidy removal was good advice but also we have to implement it in a manner that is both successful and sustainable. We are not in a situation to wake up one day and just remove subsidy.
“We have to educate the people, we have to show Nigerians what the replacement for those subsidies will be so we have a lot of work to do.
“We also need to understand that you don’t remove large amounts of subsidy in one go. It has to be graduated.”
Many took this statement as a hint of government’s intention to remove subsidy, which would inevitably increase prices. The fuel queues began to pile up and in remote parts of the country, petrol was selling for as high as N200 per litre.
It took reassurances from the federal government and the Nigerian National Petroleum Corporation (NNPC) for these queues to disappear. All because of a single comment in Washington that was neither here nor there.
One more thing…
Looking through social media comments on stories, I found that some Nigerians think that IMF makes projections because they want African countries to take loans from them.
In fact, after the African Consultative  Group meeting where delegates and IMF officials met, a group of grown men were trying to control a colleague.
Walking close to them, I could hear a visibly angry man say: “Why are they always undermining our efforts? Why are they always trying to be the smartest ones?”
It was hard to read their tags but their accent gave them away as coming from the Sahel region.
An Uber driver from Ghana, who gave me a ride in Washington, also echoed these thoughts. During this Easter break, I stumbled on a speech delivered by Moshood Kashimawo Abiola, the business mogulwho won the annulled Nigerian presidential election of 1993.
“The most brilliant doctor from Norway might not have seen malaria in his life. Bringing him here and imposing him as a medical director is like sending everybody to an early grave,” he said.
“I rely on Nigerians to keep Nigeria running efficiently. A few foreigners will be recommended by our people, not those who will be recommended by some foreign authorities over.”
If we feel this way, why are our countries still members?

This report was first published on TheCable