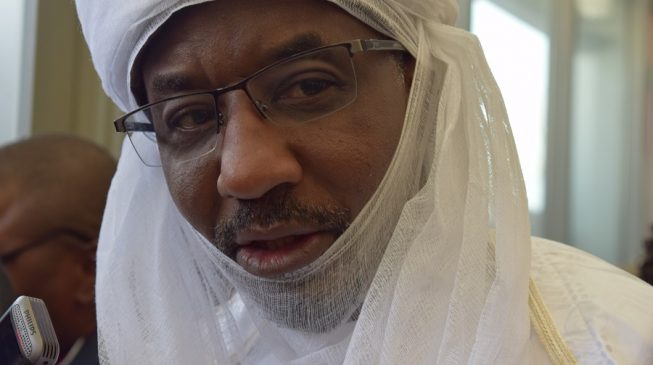 According to TheCable, Sanusi spoke at the 9th triennial national conference of Ansar-Ud-Deen Society of Nigeria in Abuja, on Friday.
The call for the restructuring had generated a series of debate under the administration of President Muhammadu Buhari, with politicians disagreeing on whether the country should be restructured or not.
The emir, who was represented by Bashir Umar of the Ado Bayero University, Kano, said elite’s blind thirst for power has resulted in tribal and religious clashes,“even though they are reducing in most part of the nation, but one type of crisis will reduce then another one will spring up”.
He lamented how elite who benefitted from the system in the past have turned restructuring into a fault line that is being manipulated and exploited.
“It is not as if we are pro- or anti-restructuring, but rather the restructuring has been turned into a fault line that is been manipulated and exploited by the elites,” he said.
“We have elite in the society that have received the best of care from the resources of the society. People of my age and those before me attended public schools from primary to university.
“Unfortunately, the elites that benefited from the system in the past have left public institutions to become vandalised, dilapidated and substituted it with a private education system that is affordable only to a very few.
“The health system has also been vandalised and now people have to go on medical tourism in India, Egypt, and Europe. The unfortunate thing is sometimes before you get the air ambulance the will of Allah will take place.”
Sanusi said elite that got power after the military created a political class that “instituted thuggery, election malpractices, corruption and destroyed the judiciary, civil service and security agencies”.
“These are all the result of the work of the political class and the unfortunate thing is that it is made to become something that is perpetual,” he said.
“This has to be changed and our duty as Muslims is to learn from the ideals of Prophet Muhammad (peace be upon him) to save the society from eminent danger that is facing it.”