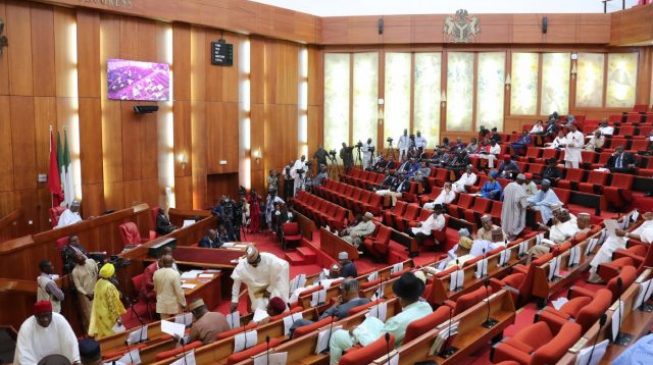 The senate has slashed federal government’s borrowing in the 2019 budget by N220 billion.

The executive had proposed N1.86 trillion as budget deficit but it was reduced to N1.64 trillion.

The decision to cut the borrowing in the budget was part of recommendations in a report on the 2019 medium term expenditure framework (MTEF) and fiscal strategy paper (FSP).

President Muhammadu Buhari had sent the document to the national assembly in November for consideration.

While presenting a report on Tuesday, John Enoh, chairman senate committee on finance, said key assumptions of daily production output of crude oil at 2.3 million barrel per day, USD $60.0/6 as crude oil benchmark price and N305 to a dollar as the exchange rate were retained.

“With regard to 2019 fiscal year, the estimated budget deficit is N1.86 trillion and it will largely be financed through borrowing as it has been the tradition,” he said.

“The committee recommends the adoption of N1.64 trillion as the amount for new borrowing to fund the deficit and advice relevant agencies to continue exploring ways of generating additional revenues.”

He asked the federal government to harness the potential of the mines and steel development ministry in terms of revenue in a bid to minimise the level of borrowing.

On crude oil production, the committee said “[There should be] continuous effort of all stakeholders in checkmating the issues of oil facilities vandalism and other vices associated with such regard.”

“The federal government should consider reducing the granting waivers and exemptions while ensuring that the Nigerian Customs Service personnel are at all oil terminals for accountability and the Federal Inland Revenue Service (FIRS) should consider increasing tax on luxury goods and services,” the report read.

“Twenty percent operating surplus to be remitted by government owned Enterprises should be deducted at source.”

The recommendations were adopted after it was put to a voice vote by Senate President Bukola Saraki.