Speakership: Nkeiruka Onyejeocha asks Gbaja to step down for her 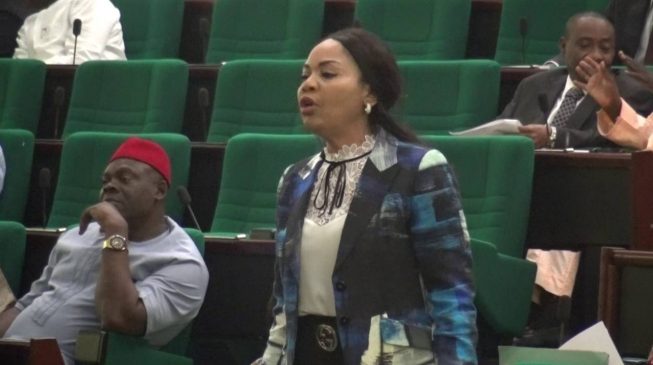 Nkeiruka Onyejeocha, a member of the house of representatives, has urged Femi Gbajabiamila, majority leader of the house, to step down for her in the race for speakership,TheCable reports.

The Abia lawmaker appealed to Gbajabiamila to “make due sacrifice” by giving up on his ambition to become speaker “for Nigeria to move forward.”
Onyejeocha and Gbajabiamila are both of the All Progressives Congress (APC) which is expected to produce the next crop of national assembly leaders having emerged the majority party in the two chambers.
Gbajabiamila has, however, been endorsed by the leadership of the party.
Addressing journalists in Abuja on Tuesday, Onyejeocha urged the party to have a rethink and zone the speakership to the south-east.
The fourth-term lawmaker said while she respects the party’s decision, Gbajabiamila should “as a leader pay the sacrifice” for Nigeria to get to the next level.
“I respect my party chairman and what the party has said it intends to do but I am appealing to them, it is not yet late to withdraw their decision and include a woman from the two geo-political zones left out in 2015,” she said.
“I know that the leader of the house, Femi Gbajabiamila, is a good gentleman and good leader but there is a time when any man who is a leader indeed to make needed sacrifice and that time is now for the leader of my party in the house of representatives.
“This opportunity comes only once when a leader will look at himself and say, ‘it’s not about me, it’s about Nigeria.’ I also believe that Nigeria needs healing and somebody has to pay the sacrifice for us to move to the next level, even if it means deciding that speakership should go to another zone.”
Onyejeocha added that zoning the speakership to the south-east will address the “demand for equity” from the zone.
She said: “As a woman who has distinguished herself and contributed immensely to the development of Nigeria, the APC should use the opportunity of my expression of interest in the position of Speaker of the House of Representatives to fulfill its promise to Nigerians, that it would increase women participation in the governance of the country.”