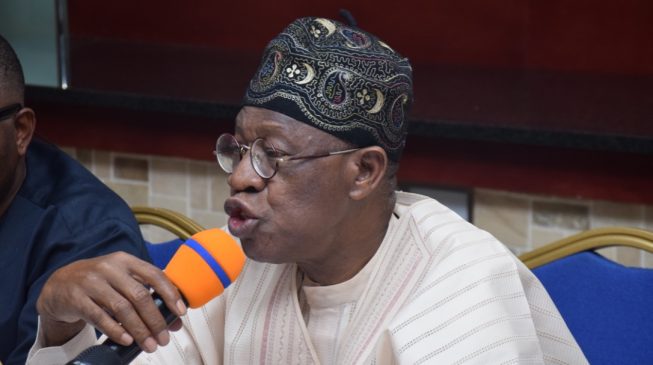 Addressing a press conference in Abuja on Thursday, Mohammed advised Atiku not to give the impression that he does not have confidence in the country’s judicial system.
The minister said this following reports that the PDP candidate hired a US lobbyist to advance his bid to take over power from President Muhammadu Buhari.
Although, Atiku denied the allegation, Mohammed said the presidential candidate had been resorting to desperation which has dire  consequences.
“As you must have noticed in recent times, posters bearing the picture of former vice-president and the presidential candidate of the PDP, Alhaji Atiku Abubakar, with the inscription: ‘THE PUKKA, H.E. ATIKU ABUBAKAR, THE REAL AND THE RIGHT’, have surfaced across major streets in Abuja,” he said.
“The appearance of these posters coincide with the media report that Alhaji Atiku Abubakar has hired a US lobbying firm to convince the United States not to recognise the re-election of President Buhari until the Supreme Court has ruled on the suit by the PDP presidential candidate.
“The posters and the hiring of US lobbyists, the latest of such by the PDP candidate, have triggered questions about what Alhaji Abubakar is up to. Is he starting a fresh campaign after the elections have been won and lost?
“Has he rescinded his decision to challenge the results of the presidential election in court, perhaps after realizing that the results he claimed to have obtained from the INEC back server are cooked? Is he now going for self-help? What really is Atiku’s motive?
“Yes, Alhaji Atiku Abubakar has lost an election. But he will not be the first or the last person to lose an election, and he should realize that losing an election is not the end of the world. He has
challenged the result of the election in court.
“That’s just as well. However, he should not give the impression that he does not have confidence in the judicial process, which is what resorting to self-help implies. He should stop overheating the polity and quit trying to instigate a political crisis in Nigeria.
“No citizen, no matter how highly placed, is above the laws of the land. Enough is enough!”
TheCable
APC - Lai Mohammed