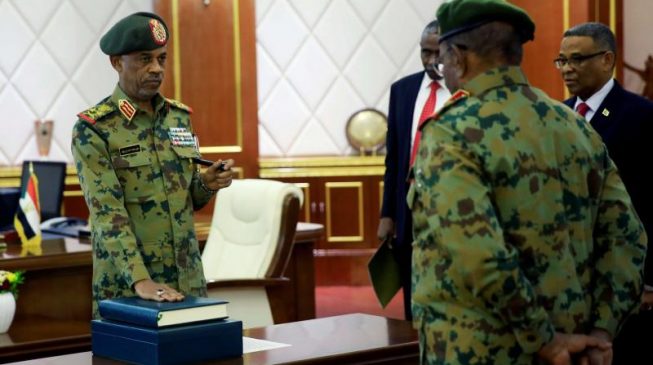 Awad Ibn Auf, Sudan’s defence minister and leader of the coup that seized power from Omar al-Bashir, has stepped down.

He announced his decision to step down at a nationwide broadcast on Friday.

In the broadcast, he said another military general would be in charge of the country.

“I hereby announce my resignation as head of the Transitional Military Council and the appointment of the person, in whose experience and suitability I trust to bring this ship to a safe shore,” Ibn Ouf said on television.

“I announce the selection of General Abdel Fattah al-Burhan Abdulrahman to succeed me as president of the military council.”

Ibn Ouf also said he had fired Kamal Abdelmarouf, his deputy, before stepping down.

After forcing al-Bashir to quit, Auf had announced that the military would be in charge of the country for two years before conducting elections.

But the protesters, who had earlier demanded the resignation of al-Bashir, mounted pressure on the military to leave.

They refused to leave the streets, saying the coup leaders were too close to Bashir.

At a news conference on Friday, Omer Zainal-Abdin, chairman of the political committee in Sudan’s transitional military council, had acknowledged the people’s right of demonstration but said the council would deal decisively with anyone who blocks a road or a bridge.

He said the task of the council was to maintain the security and stability of Sudan, while affirming that the military would not tolerate any chaos.