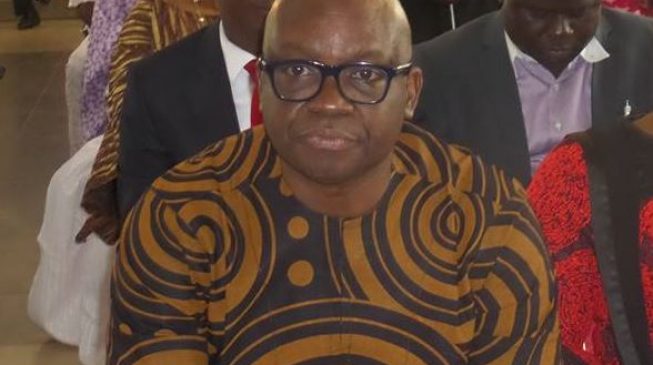 Sunday Alade, a prosecution witness in the ongoing trial of Ayodele Fayose has narrated how the former governor of Ekiti state allegedly received N1.2 billion stashed in two planes.

In his testimony before the federal high court sitting in Ikoyi, Lagos, on Monday, Alade said Fayose and his company, Spotless Investment Limited, received N1,219,000,000 from Zenith Bank, Akure branch in the build-up to the state’s governorship election in 2014.

Fayose was arraigned alongside his company on October 22, 2018, on an 11-count charge bordering on fraud and money laundering to the tune of N2.2 billion.

Alade, who is the head of business development and safety at the bank, said the money was deposited into three accounts.

“On June 17, 2014, I received a call from my head of operations, Abiodun Osode, that a customer of the bank would be coming to make a deposit into his account with the bank,” the witness said.

“He also instructed me to provide security as well as the bullion van movement team to pick up the cash from the airport.

“We were later instructed to proceed to the airport, where there would be other mobile policemen and soldiers.

“Mr. Osode also called me and introduced one Abiodun Agbele to me, before we all left for the airport.

“At the airport, I was also introduced to Mr. Adewale .O, who was the aide-de-camp, ADC, to the then Minister of State, Musiliu Obanikoro. We had to go twice, as two different planes brought in the money.”

When asked by Rotimi Jacobs, the prosecuting counsel, which department was responsible for paying and transferring such funds into accounts, the witness said such transaction can only be carried out by the head of operations with authorisation from the signatory to the accounts.

“I gathered that the cash was lodged into three accounts namely: De-privateer Limited, Spotless Investment Limited and Ayodele Fayose accounts.

“I also understand that part of the money was taken away that day by Mr. Agbele.”

Mojisola Olatoregun, the judge, adjourned the case till May 10 for continuation of trial.