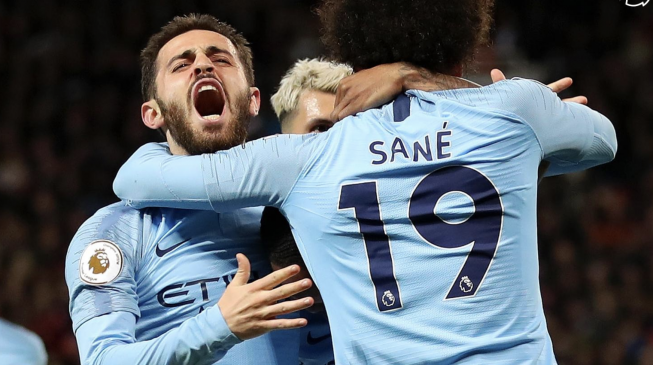 According to TheCable, this victory, which saw the team return to the top of the EPL log, took City’s overall tally of goals for the season in all competitions to 157, establishing a new all-time record for a top-flight English club.
With three games to the end of the season, Liverpool were banking on their arch rival, United, to do them a favour against a City side who are on looking to become the first team to defend the league title in a decade.
Manchester United pressed City high up the pitch from the first minute and created three openings in the first fifteen minutes, Paul Pogba’s shot from just outside the box was easily gathered by Ederson, Fred shot wide from 30 yards while Jesse Lingard smashed a first-time volley just wide of the far post to give optimism to fans.
Not to be outdone, Rashford joined in on the act, smashing just high from 30 yards. Ole Gunnar Solskjaer accused City players of nibbling fouls and clipping heels and he was correct, Kompany getting a yellow card in the ninth minute for impeding Marcus Rashford as the forward tried to dash beyond the defence.
On the attack, however, it took City 25 minutes to get a sight of goal, but Bernardo Silva’s overhead kick from the six-yard box going well wide. Sterling almost stole the lead for City on 44 minutes but his shot from five yards after a mazy run required a good save from the floundering David De Gea, and Aguero shot wide moments later, ensuring a goalless but exhilarating first half.
Ole’s men were beginning to tire at the start of the second half and with Leroy Sane on for the injured Fernandinho, City began to stretch their hosts on the wings and with it, the opening goal through Bernardo Silva on 54 minutes.
The Portuguese attacking midfielder controlled a pass from Ilkay Gundogan and hit an early shot from 25 yards out which took De Gea by surprise, finding the bottom corner for a huge goal in the title race.
Sergio Aguero should have doubled the lead a minute later after a wonderful City pass sequence, but the Argentine striker’s curler hit the base of the post and went out for a goal kick.
Pep Guardiola’s team took total control and duly doubled their lead through substitute, Sane.
The German winger took Sterling’s perfect pass and smashed his shot through De Gea’s legs for a 2-0 lead. Qatar-backed City controlled the game until the end, controlling the pace of the game to see out the potential title-deciding game.
The win takes Manchester City to 88 points after 35 games, a point ahead of Jurgen Klopp’s Liverpool and with a better goals difference (69 to 57 goals).
Manchester United, on the other hand, are stuck in sixth and sees their fourth-place bid which earns the Red Devils a spot in next season’s UCL suffer another setback following their third loss in four games.
In the other game of the night, Arsenal lost 3-1 at Wolverhampton Wanderers, undone by three first-half goals. The Gunners, in fifth place, got their consolatory goal in the second half through defender, Sokratis Papastathopoulos.
RESULTS