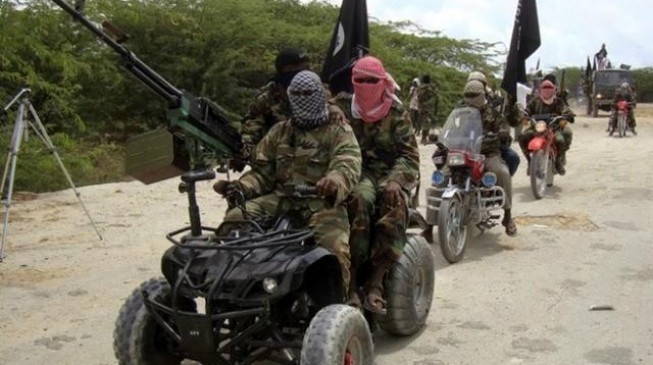 One week after Islamic State claimed responsibility for the death of 10 soldiers in Borno state, the group says it has carried out yet another attack in the north-eastern state.

The group disclosed this via Amaq, its news agency, on Saturday.
According to the information, the insurgent group struck at a barracks in Gajiganna local government area of Borno state, killing 11 soldiers and leaving many injured.
It released pictures of burnt barracks and dead bodies which it claimed were those of soldiers.
Although the army is yet to comment on the attack, TheCable reports that  an official of the University of Maiduguri Teaching Hospital(UMTH) said some of the persons involved in the attack are currently receiving treatment at the hospital.
“We have been attending to the victims of the unfortunate attack from Gajiganna and they are responding to treatment,” said the official who craved anonymity because he was not authorised to speak.
Boko Haram joined Islamic State after Abubakar Shekau, leader of the sect, pledged allegiance to the group in 2015. It, however, split with the group in 2016 over leadership issues.
In March, the IS sacked Abu Mus’ab Al-barnawi as the leader of ISWAP, a faction of Boko Haram.
Ahmad Salkida, a journalist known to have access to the leadership of Boko Haram, said the new leader of the group is Abu Abdullah Ibn Umar Albarnawi.