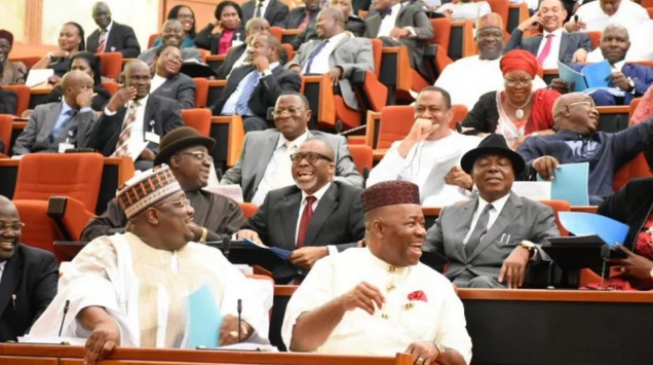 Each senator in the 8th assembly got a monthly running cost of N13.5 million. This was aside the basic salary and other allowances that they received. Since there are 109 senators, their running cost amounted to N1.47 billion in a month and would have reached a total of N70.6 billion by the end of this month. Over N70 billion was spent on running cost alone in the 8th assembly, According to TheCable.

It is no news that Nigeria lacks an effective healthcare system. Cancer has been identified as one of the leading causes of death globally. For a country of 198 million people, there are just four radiotherapy centres. The dearth of radiotherapy services in Nigeria increases the mortality rate as those who cannot afford the expensive treatment die from the sickness while others who can afford the cost of treatment travel abroad to seek medical care.

So, what could the money have been used for in this sector?

It can also be used to acquire and install 1,412 c-arm x-ray machines with one valued at N50 million. Noteworthy is the fact that c-arm x-ray machines are mostly used during orthopedic procedures and apart from being mobile, they give a real-time clear-cut view of anatomic structures of the patients.

The rate of insecurity is alarming. From banditry to kidnapping to insurgency. There have been reports of the attackers using the best type of arms and ammunition. The insurgents, for example, have been said to be in possession of more sophisticated weapons than the Nigerian soldiers.

The N70.6 billion senators pocketed as running cost over a four-year period can acquire 16 JF17 thunder aircraft which costs N4.3 billion for one.

Nigeria’s economy also suffer huge losses from the activities of sea pirates and militants in the Niger Delta region. And N70.6 billion can help make much difference in that aspect; with one gun boat valued at N20 million, 3,531 of such boats can be injected into the navy’s fight against militancy.

Nigeria currently has the highest number of out-of-school children in the world, according to the United Nations Children’s Fund (UNICEF). The organisation said about 13.2 million children in the country are not in school. Checks by TheCable revealed that N10 million can be used to construct a standard block of four classrooms. This means that with N70.6 billion, the country can afford to construct a total of N7,063 of such blocks across the country.

Another aspect the fund can be of great use is in the area of social welfare, with particular reference to empowerment programmes such as constructing information communication technology (ICT) centres in the country.

At the value of N58.3 million for a fully equipped ICT centre, N70.6 billion could be used to construct and equip 1,211 of such centres across the 36 states and the FCT.

Nigeria’s electricity situation has been anything but commendable. Recently, power generation dropped by 312 megawatts, from about 3,231 MW to 2,919 MW, after a cut in gas supply was reported in four key power plants across the nation. Despite the power being generated, citizens still complain of paying for power they never consumed through estimated billings. The only way out of the alleged exploitation is with prepaid meters now being used in parts of the country. Senators’ running cost can also come to the rescue in this aspect.

Another area the senators’ allowances can have an alternative huge impact is the water sector. In 2018, UNICEF reported that 69 million Nigerians did not have access to safe water. And 83 percent of schools in the country were said to have also lacked water supply.

Here’s where the succour could come: with N450,000 as fund for drilling a borehole in Nigeria, N7.6 billion can afford the country 1,712,515 boreholes which will most likely go round for most communities.

Only recently, the federal government approved a minimum wage of N30,000 for its workers at both federal and state levels. Before then, workers were collecting N18,000 – one of the least in the world. Interestingly, even the new minimum wage being celebrated is still far from being enough; the money is three times less than the South African minimum wage and — wait for it — 450 times lower than what a senator collects as monthly running cost (minus salary). The N1.47 billion being pocketed by the 109 senators in a month can pay a total of 49,050 Nigerian workers salaries at minimum wage level.