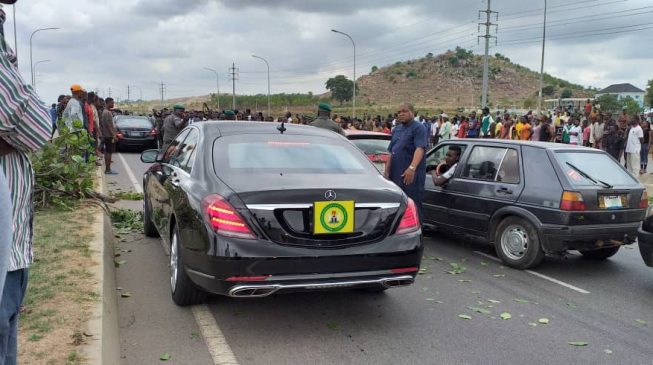 Aggrieved protesters blocked the convoy of Vice-President Yemi Osinbajo along Umaru Musa Yar’Adua expressway in Abuja on Tuesday morning.
TheCable reports that the vice-president was heading to the airport when his convoy ran into a barricade at the Goza village axis of the road.
Residents of Gbagyi village had converged on the spot, which is the major road connecting the airport to the city, to protest the alleged invasion of their land by the military.
The security aides of the vice-president tried to appease the protesters but failed, forcing Osinbajo to alight from his car.
Some of the protesters hailed the vice-president as he approached them.
Osinbajo sued for calm, assuring the protesters that their grievances would be addressed.
Apparently convinced by his intervention, the people allowed his convoy to pass but denied access to other vehicles.
Below are some pictures from the scene:

Osinbajo in midst of the crowd

Security aides of the vice-president taking charge of the situation

Other vehicles affected by the barricade

The vice-president’s convoy leaving the spot