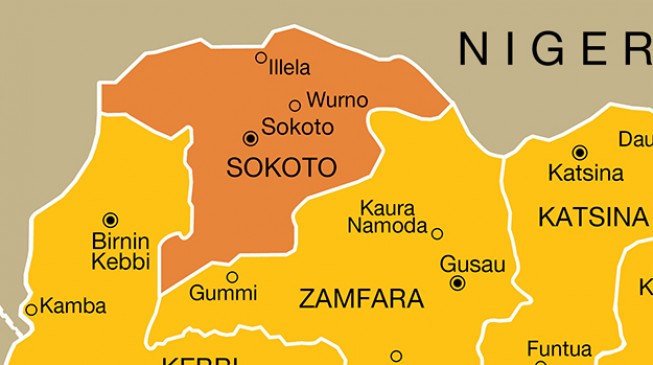 Balle is the headquarter of Gudu local government area of Sokoto state.
According to Daily Trust, the district head was dragged out of his room and shot in the head.
Culled from TheCable, the newspaper said the bandits, who came on six motorcycles, set the divisional police headquarter in the area, patrol cars and some personal vehicles on fire.
They were also said to have gunned down an unidentified policeman along Karfen Sarki area.
A witness told the newspaper that the attackers invaded the area around 4pm on Tuesday and continued wrecking havoc until some minutes after 5pm.
“The whole area was thrown into commotion with people fleeing into the nearby bush for safety including my wives and children,” the witness reportedly said.
Another witness was quoted as saying the attackers stormed the area said the attackers stormed the house of the district head after setting the police station on fire.
“They scaled through the fence of the house because it was locked, dragged the district head, who was at the time resting in his room, outside and shot him dead,” .
“I met him (Aliyu) lying in the pool of his blood, reciting Kalmat before he finally died.
“It is like they came with a mission to attack the station and kill the district head and we are suspecting  they were led by an insider who is conversant with the area because this is the first time we experienced such an attack,” he said.
Normalcy has been restored in the area by the combined security forces that arrived in the night while the deceased was buried in accordance with the Islamic rites.
The late district head was survived by two wives, eight children and many grand children.
Faruk Balle, lawmaker representing the area at the state house of assembly, confirmed the attack, adding that it was shocking because Balle used to be the most peaceful area in the state.
He called on the government to take decisive measures that would end banditry in the country.