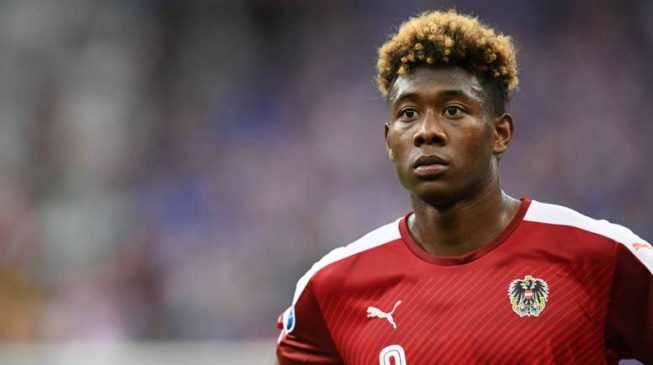 David Alaba, Bayern Munich star, has accused coaches of the Golden Eaglets of denying him the opportunity to join the Nigerian squad at the 2007 FIFA World Cup in South Korea because he refused to pay bribe, culled from TheCable.
The late Yemi Tella was in charge of the Eaglets at the time.
In an interview with All Nigeria Soccer,  Alaba called the Nigeria U-17 coaches, “jokers” and vowed not to have anything to do with any of them in future.
He claimed to have trained with Palanga midfielder, Haruna Lukman Abdulkarim, UB Conquense forward, Macauley Chrisantus and Slovan Bratislava’s midfielder, Rabiu Ibrahim ahead of the 2007 World Cup.
The 26-year-old was eligible to represent Nigeria but he switched to Austria, his country of birth, after that encounter.
Alaba, who was born in Vienna, capital of Austria, has a Filipino mother and Nigerian father.
Alaba has earned 68 caps for Austria, scoring 13 goals and represented the country at the 2016 European Championship.
On September 9, 2007, the late Tella led a team of youngsters to win the FIFA U-17 World Cup.
That was the third time Nigeria had that title after previous wins in 1985 in China and 1993 in Japan.