Buhari: How I plan to tackle unemployment 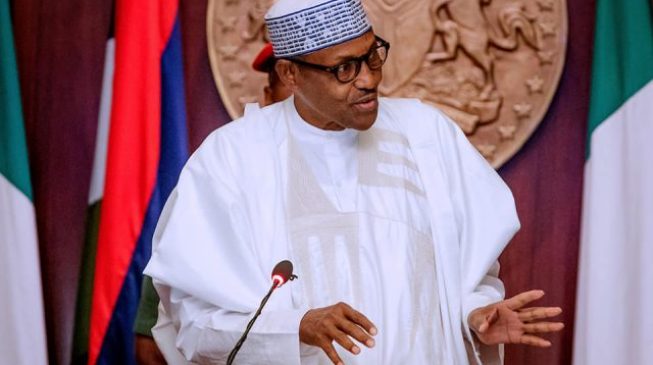 President Muhammadu Buhari, ahead of his second term, says his administration will tackle the challenge of unemployment through the tool of education coupled with a “matrix of initiatives”.

He was speaking at the 13th convocation for the conferment of higher degrees, postgraduate diplomas and honorary degrees at the Nnamdi Azikiwe University, Awka, Anambra state on Friday.
According to TheCable, Buhari, who was represented by Anthony Anwuka, minister of state for education, said the federal government will seek adequate funding for the education sector as it is important for the country’s socioeconomic development.
He urged recipients of the various degrees to utilize some initiatives and programmes put in place by the federal government as more priority will be given to education.
“Let me at this point restate the conviction of the federal government that education is the bedrock of the socioeconomic development of society. Consequently, within the limits of available resources this government will continue to give a primary of place to education,” he said.
“The federal government will remain undaunted in tackling the challenge of youth unemployment and underemployment through a matrix of initiatives.”
The president listed such initiatives to include N-Power, the Bank of Industry Youth Entrepreneurship Support (YES) programme and the Central Bank of Nigeria (CBN) and Bank of Agriculture (BoA) support schemes.
“As part of its continuing efforts to stave off the menace of youth employment, government has put in place a number of initiatives to boost the employability of graduands of our tertiary institutions, either as employees or in self-employment,” he said.
“These initiatives include, but not limited to, the Energising Education Programme,  through the Rural Electricity Agency, the intent of which is, inter alia,  to provide captive power plants for selected tertiary institutions, thus providing them with much needed uninterrupted power supply; and the Skill G project by TETFund which provides computers, laboratory equipment and other learning resources to tertiary institutions.”