CLOSE-UP: Lawani, the incumbent rep who is set to take Yari’s senate seat 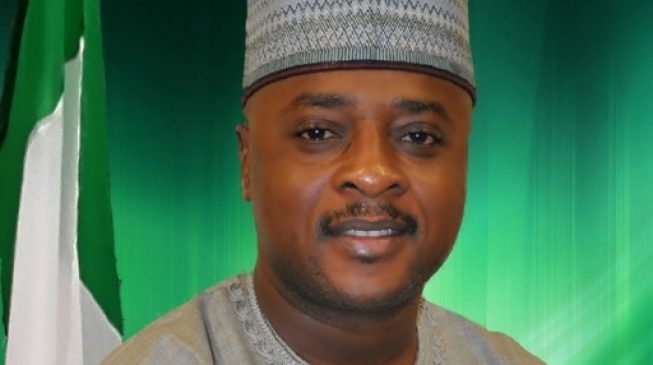 If Lawani Anka Hassan, member representing Anka/Mafara constituency at the lower chamber had remained in the All Progressives Congress (APC), he might not be on the list of those favoured  by thejudgement of the supreme court on the elections in Zamfara state.
Culled from TheCable, the supreme court declared that the APC in Zamfara had no candidates in the 2019 elections, and therefore could not claim to have won. The five-member panel of justices, presided by Ibrahim Muhammad, acting chief justice of Nigeria, unanimously held that the party with the second highest votes in the election should be declared the winner as long as it fulfilled the constitutional requirement.
In November, the lawmaker defected to the Peoples Democratic Party (PDP) where he eventually got the party’s ticket to run for Zamfara west senatorial seat.
With a wide margin, Abdulaziz Yari, the incumbent governor of the state and APC’s candidate for the senatorial seat defeated Hassan. While Yari polled 153,626 votes, his rival got 69,293 votes. The court, however, has voided votes cast for Yari, ordering that Hassan, the runner-up be sworn in as long has he has fulfilled the constitutional requirements.
Section 179, sub-section 2 of the constitution says: “A Candidate for an election to the office of Governor of a State shall be deemed to have been duly elected where, there being two or more candidates – he has not less than one-quarter of all the votes cast in each of at least two-thirds of all the local government areas in the State.”
Although, some political observers have interpreted this section to mean that PDP candidates lack the requirement to be declared winners of the election, analysis by TheCable has shown that the PDP could be the beneficiary of the supreme court judgement since the apex court has voided all the votes of the APC in the election.
Anyway, INEC has announced that its position on Zamfara election would be made known on Monday .
In October 2018, just a month before Hassan dumped the ruling party, he had lamented over the crisis that rocked the APC in Zamfara. While still in Yari’s camp, Hassan said everything has time and he wouldn’t know how things were going to play out.
“Everything has time. You know they put time for primaries. The governor’s camp of which I am part conducted the primaries but the other faction didn’t agree. They were not part of the primaries,” he had said.
“I don’t know how things are going to play out. It is beyond my powers. INEC has written, and I have seen the letter. I really don’t know what to say on that.”
One would have thought the lawmaker had a feeling of what to come. By November he was already in the PDP, and he eventually contested a seat against his governor.
EDUCATIONAL BACKGROUND
According to his profile on the national assembly website, Hassan attended Anka Township Primary School between 1975 and 1980. He proceeded to Government Secondary School in 1980 and left in 1985. Between 1995 to 1998, he was at the Kaduna State Polytechnic in Zaria.
He was a student at Abdu Gusau Polytechnic, Talata Mafara, from 2000 to 2002 and was at Kano State Polytechnic from 2008 to 2009 for his higher national diploma (HND).
He was elected into the house of representatives in 2011, and having been member of various house committees, he was vice-chairman, information and national orientation, ethics and values committee from June 2015 to May 2019.