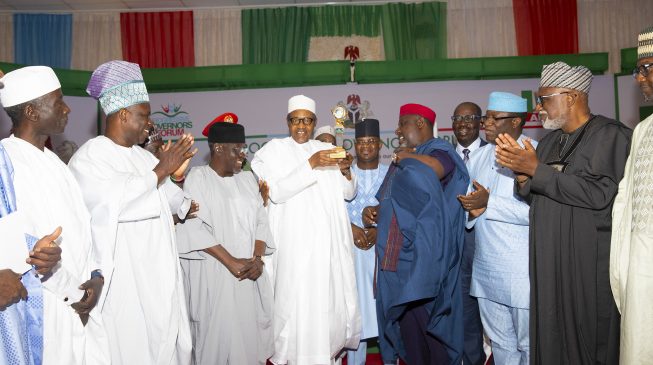 The Peoples Democratic Party (PDP) has described the presentation of award by the All Progressives Congress (APC) governors to President Muhammadu Buhari as an unprofitable celebration and a poor endorsement of failure.

According to TheCable, Kola Ologbondiyan, spokesman for the PDP, made this known in a statement on Friday, after Buhari was presented the award.
The main opposition party also said the award was given on the basis of deception, adding that such was an insult to Nigerians living in pains, as well as victims of unrestrained killings in various parts of the country.
Ologbondiyan said the Buhari’s administration and the APC are engaging in script acting aimed at painting a false image of their administration.
He said the party was engaging in such unprofitable celebration at a time when its mandate is being questioned.
He advised the party to seek solutions to the numerous insecurity issues in the country, rather than sponsoring scandalous whitewashing projects.
“It is disturbing that at a time genuine leaders are exerting themselves for solutions to the myriads of crisis plaguing our nation, those elected on the platform of the APC are busy playing to gallery and acting scripts while our nation continues to slide; the very reason Nigerians voted for Atiku Abubakar on February 23, as their preferred presidential candidate,” PDP said.
“The Buhari presidency and the APC have chosen to engage in endless unprofitable celebrations in the safety of Aso Villa while Nigerians are left at the mercies of bandits, kidnappers, marauders and insurgents in their homes and workplaces.
“The PDP counsels president Buhari to end the circus at the Presidency and face the stark reality of the dejection, despondency and misery Nigerians have been subjected to due to his incompetence as well as insensitivity to the plight of the citizens.”