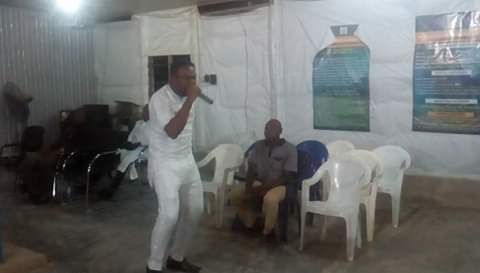 Apostle Daniel Duru in his message on ‘Who appeared to You’ has described faith as abnormality.

He added that every man that is born from a foundation has foundational issues.

Duru who is the senior pastor at the City of Power International Ministry stressed that the duty of this spirit is, it appears before arrival.

“A young man traveling from Abuja to Edo state, getting to Lokoja he had an accident with a trailer and he died. The spirit waited for him before his arrival and triggered his death on that junction that he lost his life.

“Every man that is born from a foundation, there are some spirits generated even before your father was born, they have been in existence and these spirits are angry because the father that served them is no more, he is dead. But the one, who is supposed to carry on like the father, has refused to do that because he/she knows God.

“So these spirits decided that now that on one is serving them, they will frustrate the generation that will come from his lineage.

Every family has foundational issues, but what can I do to breakout from this foundational spirit monitoring the affairs of my life?

You must understand the place of prayer

A man that cannot pray will not live long…show me a man that knows how to pray, I will show you a man that built an edge round his life.

You must be engaged to your prophet

Your prophet carries the ability to see your future ahead of you and to see the attack that will kill you before manifestation. God has given ways to your prophet to appear in your future and remove the error that would have killed you before you arrive there.

You must lost your mind, you must be abnormal

It takes abnormal men to live a life of longevity. What will make a mad man drink dirty water, eat rotten food and he still looks healthy, is abnormality. You that is normal if you try it you will end up in the hospital. It takes abnormality to breakout from the prison gate of the forces from your father’s house. It takes abnormal men to enjoy longevity; he that is normal is faced with untimely or sudden death. Death respects those who are abnormal. The word normality means you have accept defeat. The world is too spiritual to be normal. If you must go through the journey of peace, you must also understand the place of abnormality. When a man lives abnormal life, he accesses greatness at ease. The Bible said: and Shedrack, Meshack and Abednego said to the King ‘O king we are not careful to answer you in this manner, if the God that we serve has decided not to deliver us, we will still not bow to this god’, that’s abnormality. What will make a man stand before death and he is still boasting of a God he has not seen, the unseen God, is abnormality. Faith is abnormality! It is something you have not seen or known. What makes you believe a God you have not seen is abnormality. Whatever deals with a man is not normal. The demon that sucks blood is not normal. If you must deal with the demons and the patterns in your father’s house, it takes abnormal men to deal with them. Demons don’t respond to normal but abnormal men”.

I pray that the Spirit grace of abnormality to defeat those forces and patterns in your father’s house, rest upon your life in the name of Jesus.

Every spirit from my father’s house monitoring the affairs of my life, Lord appear for my safety.

(The duty of this Spirit is to appear for your safety.)

Every spirit frustrating the efforts of my life, Lord appear for my safety.

Oh Lord make me abnormal that I breakout from the patterns in my father’s house.