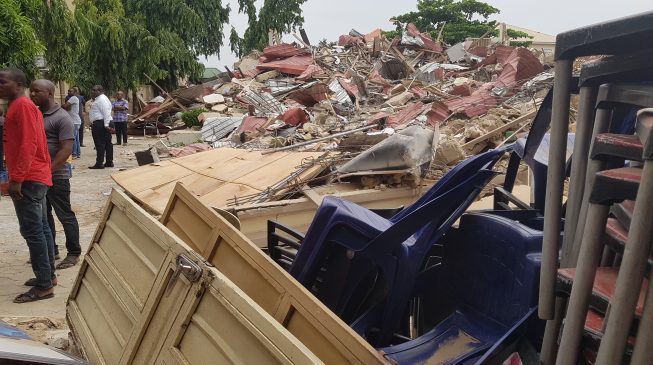 The Federal Capital Territory Administration (FCTA) has demolished Caramelo, a popular night club in Abuja.
TheCable reports that the FCT authorities demolished the club on Monday, less than a month after they raided the club.
About 34 ladies alleged to be strippers were arrested during the raid, which later metamorphosed into alleged sexual abuseinvolving some policemen.
The FCTA had said the club is located in a residential area and that the use of the building violates Abuja Master Plan.
TheCable gathered the authorities gave the club owners vacation notice last week.
Umar Shuaibu, cordinator of Abuja Metropolitan Management Council, an FCTA agency, had told journalists the plot where the club is built was oroginally zoned as a health clinic.
He had said the club was raided following complaints from residents on alleged nuisance, leading to a surveillance in the area.
“The outcome of the surveillance revealed that the complaints are genuine and real. Please note that the substance of these complaints include, noise nuisance from loud party music, nude/strip dancing club activities intractable traffic challenge, resulting from uncontrolled patronage to the commercial nightclub within the residential precinct,” Shuaibu said.
Some other clubs in the city were subsequently raided by the FCT authorities.