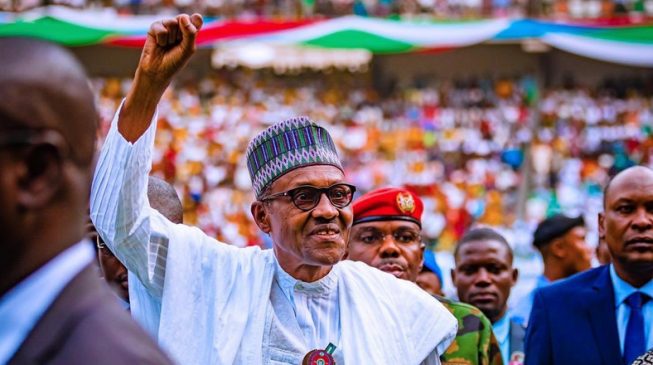 In a piece titled, “Buhari: Why and how he won,” TheCable reports that Shehu said Buhari’s achievement are there for all to see.
He said the Buhari administration has spent four years in office without a major scandal which earned the president the “continent’s anti-corruption champion”.
“President Muhammadu Buhari, who came to office in a seismic political shift that swept out of office 16 years of continuous rule by the Peoples Democratic Party, PDP recorded yet another resounding victory to win a second term in office,” he said.
“While campaigning for the 2015 general election, President Buhari’s All APC made promises to end Boko Haram terrorism and secure the country for it to be efficiently managed; to restructure the economy, halt its downward slide and create jobs and to fight corruption.
“His climactic victory against the then incumbent Goodluck Jonathan, his strong message on the three issues as listed above, his practical and serious approach helped to awaken a nation misled by characters who placed self above nation for sixteen years and more.
“The Buhari administration has established for itself an anti-corruption reputation and has been in office nearing four years without a major scandal. The African Union has on account of this, selected the President as the continent’s anti-corruption champion.
“The President and his party looked certain of victory from the sea of crowds that attended his political rallies all over the 36 states of the federation.
“These rallies attracted large crowds, mostly of the poor who are trusting in his impeccable qualities of honesty and integrity, and have bought into the idea that he will quickly push their country onto the top by lifting up the economy, creating jobs, securing the nation and ending the nightmarish corruption which had become the order of the day.
“The party itself doubled down on President Buhari by zeroing in on his image as a diligent, coolheaded and incorruptible leader. In that enduring appeal, the APC saw a trump card going into the election.
“Nobody can question President Buhari’s achievements. They are there for all to see.”
Listing the achievements of the president, Shehu said the current administration is committed to investing in people.
He said the PDP, in its 16 years in power, failed to realise how much the sterling qualities of Buhari meant to ordinary Nigerians.
He added that the PDP would have realised now that demonising Buhari during the 2019 presidential campaign didn’t work for them.
“Reforms are being carried out in the justice sector with a number of domestic legislations and international agreements to facilitate the identification, tracing, freezing, recovery and forfeiture of ill-gotten assets,” he said.
“The Buhari administration has also demonstrated a single-minded commitment to upgrading and developing Nigeria’s transport, power and health infrastructure.
“Road projects are ongoing across every state of the country, with many of these projects having been abandoned for many years. The Buhari administration has more than doubled power generation capacity.
“The main opposition to President Buhari, the Peoples Democratic Party failed to realize how much these qualities meant to ordinary Nigerians; they did not reckon with the disillusionment of the citizens with their perceived acts of commission and omission for the 16 years they were in power.
“They must by now, have realized with a benefit of hindsight, that demonization and denigration of an individual does not bring in poll dividends. In their campaigns, they chose to demonise and denigrate Muhammadu Buhari as President. It did not pay.
“Before and after this election, there is no face in the opposition who can match President Buhari’s inspiring character and personality.”