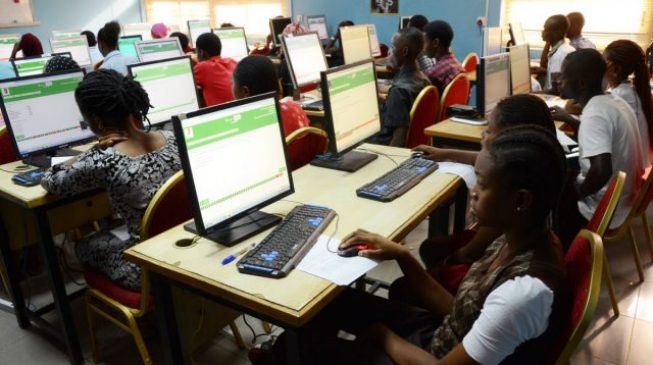 The Joint Admissions and Matriculation Board (JAMB) has released the results of 1,792,719 candidates who sat for the 2019 Unified Tertiary Matriculation Examination (UTME).

TheCable reports that Is-haq Oloyede, JAMB registrar, disclosed this to journalists in Abuja on Saturday.
He said the board withheld the results of 34,120 for various infractions during the examination across the nation. He added that 15,145 results were withheld for further clarification.
Oloyede, therefore, advised candidates to use the phone number used for registration and text it to 55019 to get their results instantly.
“For 2019 results 1,886,508 candidates registered including those in foreign centres,” he said.
“Out of this number which excludes Direct Entry, 59,667 were absent and a total of 1,826,839 sat for the UTME.
“Today, we release 1,792,719 results. Some 34,120 results withheld including the results of 15,145 candidates identified by identical twins for further clarification.”
The 2019 UTME was held from April 11 to April 18 with over 1.8 million registered candidates. Since then, the board did not release the results.
The exam body had previously told candidates that their results would be ready from April 29.
The results were not released on that day, prompting worries from some candidates who pleaded with JAMB to release “at least parts of the results to reduce the tension.”
The board explained that it would first screen the entire candidates’ results to weed out those who were involved in any form of malpractice during the examination.
The board subsequently assured candidates that it would release their UTME resultsfrom May 11.
“We are releasing our results tomorrow, we are having a meeting today to consider what to put out,” Oloyede had said on Friday.