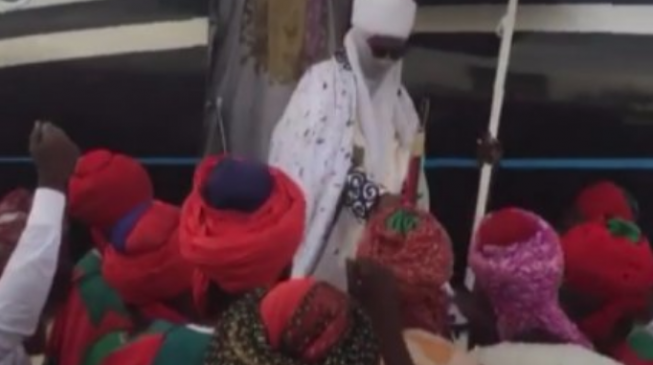 Sanusi was on lesser hajj in Saudi Arabia when the Kano emirate was split into five.
The Kano house of assembly transmitted the bill to break up the emirate to Abdullahi Ganduje, the governor, on Wednesday and he gave assent to it a few hours later.
Despite a court order restraining him from implementing the law, Ganduje appointed four new emirs and handed them staff of office on Saturday.
With the development, the size of the emirate under Sanusi has been reduced to 10 out of 44 local government areas (LGAs) in the state.
The new emirs are Aminu Ado Bayero (Bichi), Ibrahim Abdulkadir (Gaya), Tafida Abubakar (Rano), and Ibrahim Abubakar (Karaye).
The governor is believed to have carried out the act to whittle down the influence of Sanusi, who was said to have worked against his reelection.
Sanusi has not made any public comment on the issue.
TheCable reports that when his plane touched down at the airport, the crowd cheered him, pledging loyalty to the The first-class monarch.
The emir’s convoy went straight to the palace from the airport, but with the crowd , a journey of 15 minutes lasted hours.
Among the traditional rulers who welcomed him at the airport were Makama Kano, district head of Wudil; Abdullahi Ibrahim, district head of Doguwa; and Aliyu Umar, district head of Warawa.