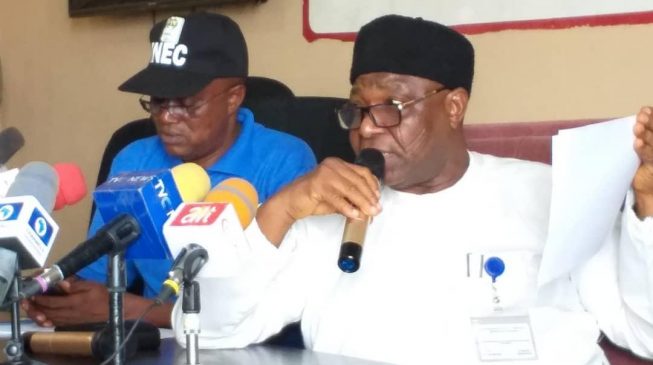 In a report seen on TheCable, Madami said he was offered money but he refused the offer and stood his ground, even though it was “tempting”.
Madami, however, did not state which party or persons offered him bribe.
The Peoples Democratic Party (PDP) lost the presidential, national assembly and governorship elections. Senate President Bukola Saraki could not secure his return ticket.
He said his ultimate goal of the election was to make Nigeria and INEC proud.
“There was pressure by politicians who offered me money to compromise the 2019 general election in Kwara state but I stood my ground and refused to give in,” Madami said.
“The nature of our job at the Independent National Electoral Commission (INEC) is too tempting.
“It is left between you and God to do the right thing and keep your integrity or compromise and lose your integrity. You may even go to jail.
“The politicians have money and some of them feel that they can buy anybody with the money. It is a matter of integrity, it is left for you to be careful and work transparently to keep your integrity.
“What I did in Kwara state before the elections was to go on air and tell the people that no amount of money can buy me.
“I made them to understand that their votes will count and was not ready to compromise,”
The Economic and Financial Crimes Commission (EFCC) had arrested Sulaiman Ishola, accountant-general of the state, for allegedly setting aside N1.5 billion for vote buying.