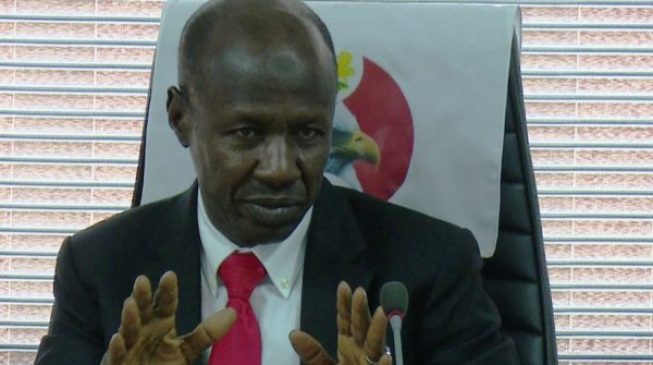 Ibrahim Magu, acting chairman of the Economic and Financial Crimes Commission (EFCC), has accused governors of promoting insecurity in their states in order to inflate their security votes, TheCable reports.
Presenting a paper on Wednesday in Abuja at the just-concluded induction programme for the returning and newly elected governors by the Nigeria Governors Forum (NGF), Magu urged the governors to be transparent in the expenditure of public funds.
He maintained that the insurgency in the north east, militancy in the Niger Delta and banditry are products of corruption. He also said that the country’s loss to corruption runs into trillions of naira in the last decade.
“We have also seen evidence of theft of public resources by some state governors – cashing on the insecurity in their states,” Magu said.
“Insecurity has also offered the required oxygen for corruption to thrive as evident in the $2.1 billion arm procurement scandal involving top military commanders both serving and retired.
“Mass poverty in the region due in part to corruption by the ruling elite, is largely to blame for the ease with which the islamists are able to recruit fighters to sustain their aggression against the Nigerian state.
“As an investigator, I am shocked by the quantum of resources stolen from the Niger Delta Development Commission (NDDC) by those who run the intervention agency. It is so bad that even a mere personal assistant to a former Managing Director was charged for stealing over N3 billion.
“Whether we like it or not, corruption and terrorism have become the twin evils, undermining our collective efforts to make Nigeria a truly great country.”
The security vote is a monthly allowance, which is allocated to states, for the funding of security services, depending on the nature and level of insecurity.