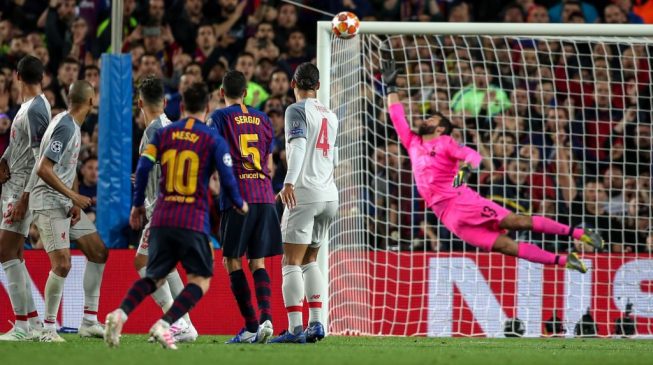 Barcelona, led by a Messi brace which included a brilliant free kick, put Liverpool to the sword with a clinical 3-0 victory at the Camp Nou stadium to hand the Spanish side a huge advantage in their quest to reclaim the Uefa Champions League crown, TheCable reports.

In a cagey first half which started with penalty appeal for both sides, Liverpool threatened through the pace of both Sadio Mane and Mohammed Salah, while Barcelona’s Lionel Messi was in menacing mood despite the valiant effort of this well drilled Liverpool team.

The Uruguayan forward timed his run between two defenders to perfection to meet Jordi Alba’s through pass with his outstretched leg, diverting the ball past Alisson Becker at his near post for his first UCL goal of the season and Barca’s 500th of the continental competition.

Mane, Liverpool’s go-to forward this season, should have done better with his side’s first clear-cut chance when captain Henderson’s deep pass found him beyond Pique and Lenglet in Barca’s defence, but he couldn’t connect well, shooting high and wide.

Jurgen Klopp’s side matched the Catalans pound-for-pound and started the second period on the front foot with two excellent chances, but they were not at their clinical best.

James Milner’s curler and Salah’s low drive required top saves from Marc-Andre ter Stegen, but they created their best chance yet with a sweeping move involving Salah that ended with Milner shooting straight at the goalkeeper with a gaping goal at his mercy.

Despite Liverpool’s dominance, a pragmatic Barca side which has been moulded by Ernesto Valverde struck with their first chance- against the run of play- through none other than Leo ‘La Pulga’ Messi.

With Liverpool failing to play out from the back, Barca pounced and while Suarez’s shot hit the bar, 31-year-old Messi was on hand to tuck the rebound into an unguarded net for 2-0.

The diminutive playmaker would go on to make it 3-0 with a delectable free kick from 30 yards, his 600th goal for Barcelona.
Messi, who has now scored against every English side he has faced in the UCL, netting 26 goals in the process, will look to finish off the Reds in the return leg at Anfield next week.