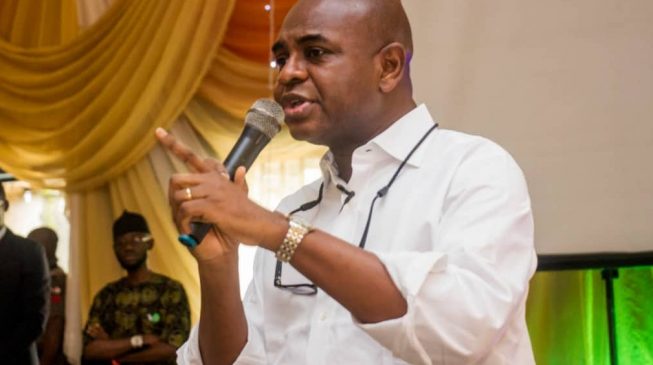 Moghalu said what we have in Nigeria is not democracy but a ritual that occurs every four years where the political cabals return themselves to power using things that look like the structures of democracy.
In his lecture, titled “Grassroot Governance: The Soft Underbelly Of Nigeria’s Political Architecture,” he said “without good leadership, you cannot have good governance”.
He said the local government should be scrapped because the real issue of the failure of local governance in the country is as a result of “the long-delayed constitutional restructuring of Nigeria”.
“We need to empower our people to demand good governance, accountability,” he said.
“Without restructuring Nigeria, It will be very difficult to get local governance in Nigeria. What we should do is that there should be two tiers of governance in Nigeria; the national government and the sub-national government where the latter can then create whatever structure they deem appropriate at the local level.
“The question of constitutional restructuring must be addressed. We as citizens, who elected them, should take responsibility for the failure of our government because if you want a restructured Nigeria, then you should vote for a government that believes that Nigeria is not working and needs constitutional restructuring.
“The reason we are still missing it in over 60 years is that we still haven’t got good leadership.”
Remi Sonaya, presidential candidate of KOWA Party in the 2015 election, said politics is supposed to give services at the local level.
She said Nigeria is still in the throes of unsettling aftermath of election and many of us are despairing about democracy.
Ibikunle Amosun, governor of Ogun state who was represented by Yetunde Onanuga, his deputy, said the lecture has continued to set the tone for public lectures that have shaped the political sphere in the last three years.
“We need to keep bringing topical issues to the front burner of national discussions towards aiding the sustenance of democracy in Nigeria but also towards enhancing the unity and sovereignty of our dear country,” she said.
“The choice of the subject matter for this year’s event is both apt and contemporaneous in relevance. It is important at this point to note that the challenge of the Nigeria political experience since the return of democracy is how to ensure the percolation of dividends of democracy down to the grassroots.
“Our democratic journey can only become firmly rooted while we also experience a socio-economic boost if only critical attention is paid to the grassroots.”