Ngige: N30,000 minimum wage arrears will be calculated from April 18 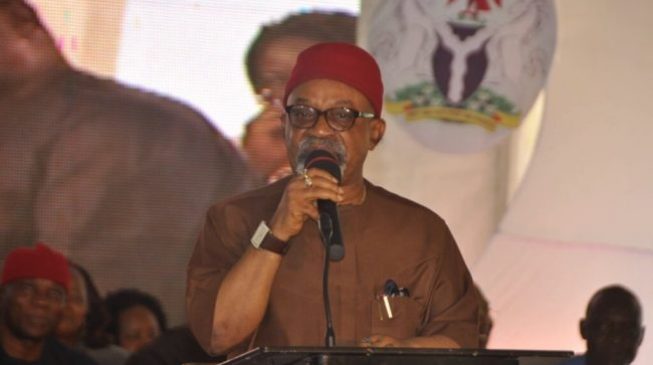 Chris Ngige, minister of labour and employment, says the delayed enforcement of the new minimum wage will translate into salary arrears for workers.
Speaking in an interactive session with journalists in Abuja during the weekend, TheCable reports that Ngige said no governor is exempted from paying N30,000 as minimum wage.
President Muhammadu Buhari had signed the minimum wage amendment act into law on April 18.
According to the minister, all employers of labour in the country must comply with the law, noting that a committee was working out a new template for upward consequential adjustment for those already earning above N30,000.
“It is a national law and no governor can say he will not pay. Issue of the national minimum wage is item 34 on the exclusive legislative list of the third schedule of the Nigerian constitution,” Ngige said.
“Every state government is now owing workers if they have not started paying N30,000. They are owing workers effective from 18th of April, a new minimum wage.
“We are now in a committee working out a new template with which we will adjust upward, the consequential adjustment for those already earning above N30,000.
“The minimum wage is for the most vulnerable down the ladder and that is the man on grade level one step one. So, you must consequentially adjust for the man on grade level two, grade level three, grade level four and five, because that man on GL 1 step 1 has overtaken them with his new payment.”
Asked when workers would begin to enjoy the new minimum wage, Ngige replied that they had started enjoying it.
“They will enjoy it. Infact, they have started enjoying it. Employers in the private sector adjusted immediately because it is easier for them to do. In the government sector, the bureaucracy and bottleneck of government are responsible for the delay,” he said.
“You know that you must budget for it. That is what is causing the delay. But whenever the encumbrances are removed, they will pay arrears with effect from 18th April, 2019.”
Denying allegations of frustrating the implementation of the new minimum wage, Ngige said he is the major influence on the implementation.
“I saw the NLC president on television saying so. But that was when they were trying to picket me and I pitied him because he was trying to blackmail me in the wrong direction.
“I am the prime mover of the new minimum wage. If you ask anybody in the federal executive council, they will tell you so and the president will also tell you so and he has said so many times.
“So, the president of the NLC is playing politics. But he can’t play politics on workers like that. If he wants to play politics, he should leave labour unionism because the labour laws do not allow labour leaders to play partisan politics.”