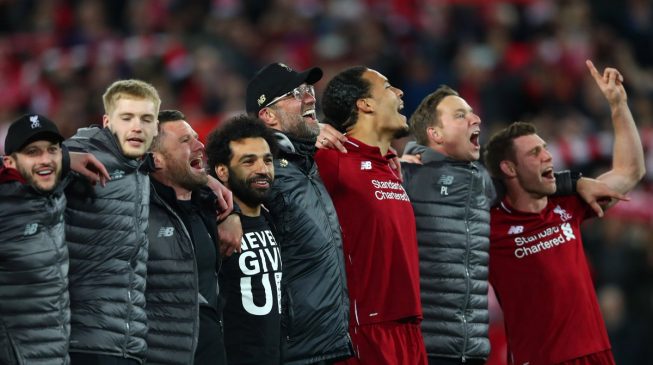 It was history all over again as Liverpool conjured up the spirits of the 2005 side that won the UCL from three goals down.
It was, however, the demons of Rome that came back to haunt Barcelona, who famously let another three-goal lead slip twelve months ago against AS Roma.
Despite the absence of Mo Salah and Roberto Firmino, Liverpool had braces from the duo of Divock Origi and Giorgino Wijnaldum to thank for another famous and historic victory to make a second straight UCL final.
Divok Origi started the comeback on seven minutes, Liverpool the ball deep in Barca territory and the striker tapped in the rebound after ter Stegen had saved Henderson’s low shot.
Liverpool enjoyed over 50% of possession against a patient Barca side that knows when to attack, and they did carve out three good openings as the half progressed, but Liverpool keeper, Alisson Becker, was equal to the task.
By the end of the first half, Ernesto Velverde’s team, led by the mercurial Messi, had created more clear-cut chances than their hosts, but Becker denyed the Blaugrana on the interval, saving Alba’s close-range shot to preserve Liverpool’s lead at halftime.
Klopp brought on the midfielder, Giogino Wijnaldum, at the interval and the midfielder obliterated Barca’s two-goal aggregate advantage with a quick brace.
The Dutchman, whose goals for Liverpool in the UCL have all come in the semifinals, arrived to slot in Trent-Alexander Arnold’s deflected low cross with a low shot, and a minute later, rose highest to meet Xerdan Shaqiri’s cross with a bullet header to send the Anfield crowd into frenzy.
The Reds stung a sleeping Barca side with the fourth goal on 78 minutes, through the hardworking Origi.
Arnold’s quickly taken corner kick caught Barca’s defence flat-footed, and the Belgian forward side-footed into the top corner despite last-gasp attempts of Pique, much to celebrations from a shocked Anfield crowd which had Steven Gerrard in attendance.
Led by towering centre back and their player of the season, Virgil van Dijk in defence, Jurgen Klopp’s men became only the third team to overturn such first-leg deficit in the semi-final.
They await the winner of tomorrow’s tie between Ajax and Tottenham Hotspurs in the final in June.