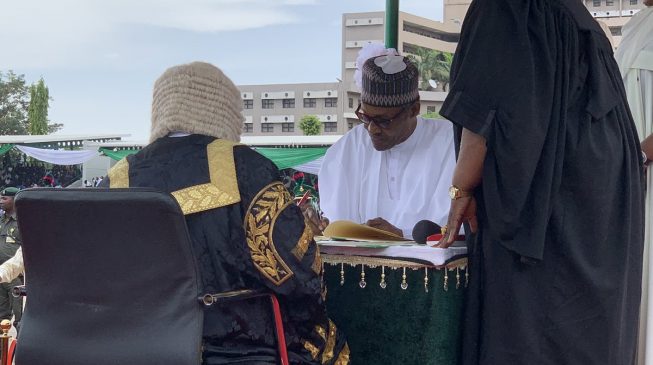 The former presidents had endorsed Atiku Abubkar, presidential candidate of the Peoples Democratic Party (PDP) in the general election.

Ibrahim Muhammad, acting chief justice of Nigeria (CJN), has administered the oath of office on Buhari and Osinbajo, with their wives standing beside them.

Soon after the swearing in, there was lowering and hoisting of national and defence flags and 21 gun salutes.

Afterwards, the president inspected the guard of honour and acknowledged cheers from the guests.

The event attracted former and serving governors, service chiefs, members of the diplomatic corps, members of the federal executive council, Senate President Bukola Saraki; Yakubu Dogara, speaker of the house of representatives, Boss Mustapha, secretary to the government of the federation, among others.

Adams Oshiomhole, national chairman of the All Progressives Congress (APC), Bola Tinubu, a national leader of the ruling party, were also present.