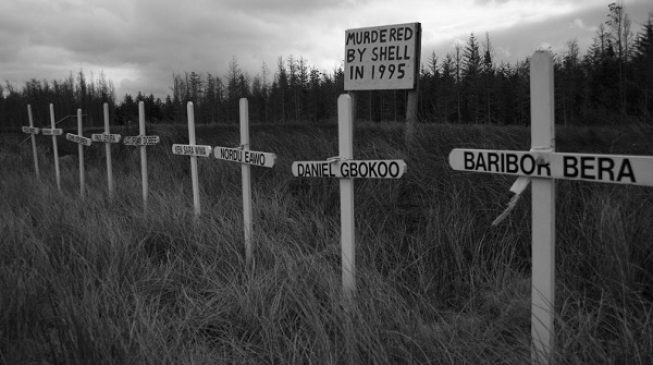 The Hague district court on Wednesday ruled that it has jurisdiction to hear the case brought by Esther Kiobel and three other women against Shell.
TheCable reports that Nine members of the Movement for the Survival of the Ogoni People (MOSOP), including its leader, Ken Saro-Wiwa, were executed in 1995 by the military government of Sani Abacha over their protest against environmental degradation in Ogoni land as a result of oil exploration activities in the Niger Delta region.
Kiobel and the other widows of the four activists–Barinem Kiobel, Baribor Bera, Nordu Eawo and Paul Levula–had accused Shell of complicity in the unlawful arrest and execution of their husbands.
After exhausting all legal options in Nigeria, Kiobel first brought a suit against Shell in New York in 2002. However, the US supreme court ruled in 2013 that the case had been filed in the wrong jurisdiction.
The widow then filed a suit in Hague, where the multinational oil company is based, demanding compensation from Shell.
In its ruling on Wednesday, the judges said the widows would be able to bring further evidence to prove their case.
The court also ruled that Shell should hand over some confidential internal documents to the plaintiffs’ lawyers, adding that they would have the opportunity to examine witnesses.
Shell has denied the allegations though it acknowledged that it was aware Nigeria’s military was taking action to protect the company’s infrastructure.
Commenting on the ruling, Mark Dummett, Amnesty International’s head of business and human rights, said: “This decision marks a vital step towards justice for Esther and the other plaintiffs. It also sets an important precedent for other victims around the world who are seeking to hold powerful corporations to account, and who struggle to access justice.
“We salute Esther Kiobel, Victoria Bera, Blessing Eawo and Charity Levula. It’s only because of their courage and persistence that we’ve got this far.
“The women believe their husbands would still be alive today were it not for Shell’s relentless pursuit of profit, which encouraged the Nigerian government’s bloody crackdown on protesters even when it knew the deadly human cost. Shell might now face questioning in a court of law about what they knew and how they contributed to this horrifying event in Nigerian history.
“Today’s ruling will have great significance for people everywhere who have been harmed by the greed and recklessness of global corporations.”