Poju Oyemade: Our goal for The Platform was to reach 5,000 — today we get to millions 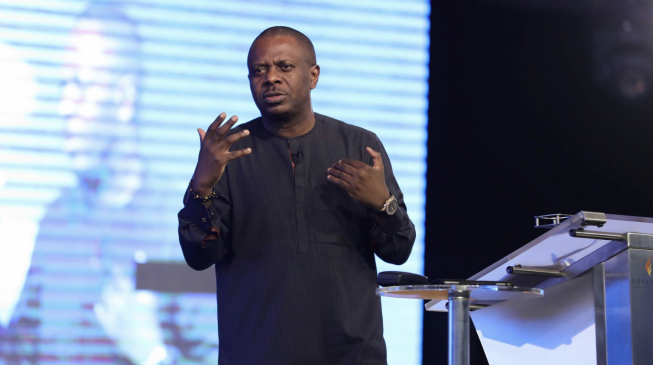 Poju Oyemade, the senior pastor at Covenant Christian Centre, says the goal for The Platform at inception was to gather 3,000 to 5,000 people, but the event has gone on to become a phenomenon being watched by millions of people across the world, TheCable reports.

Speaking at the Wednesday edition of The Platform, the pastor said the event was an offshoot of a seminar he ran in school as a student of the University of Lagos.

“The event, which was later named The Platform was conceived in 2007, as an offshoot of a small seminar that I used to run as a student at the University of Lagos,” Oyemade said.

“It was designed to bring experts and inspirational figures from all walk of life to share their expertise, knowledge, experience and challenges, with the purpose of inspiring, educating and challenging people into greater heights in terms of enterprise development as a way of celebrating May 1st, which was workers’ day.”

The visionary went on to say the October 1st part of The Platform was later added to focus on national development, stating that it had since experienced unprecedented growth.

“On the 1st of October, we later added another event; this one was targeted national development. The idea behind it was to start a public conversation over the set ideas we believed could push our nation forward.

“Nations all over the world, we believed, had developed on a practice of a set of similar ideas and principles. We decided to use this as a way of pushing these intelligent thoughts and moral principles into the consciousness of Nigeria.

“This is why we called it The Platform, which was simply a stage to promote ideas. We believe that if certain progressive ideas enter into state consciousness, they would eventually become policies.

“I remember the inception, saying at the first gathering that our goal was to have a gathering of about three to five thousand people when this vision matures.

“From hosting a few thousand Nigerians at the first edition held on the 1st of May, 2007 to then tens of thousands at further editions, and now millions of people both outside the nation and within the nation, it has evolved into a full-scale global media event.

He said “But with great growth comes certain responsibilities; anything that grows will become wild if it is not pruned”
Oyemaded said “at this particular edition, we have pressed the reset button, and gone back to the fundamental reason why we started The Platform; we are focused on looking at the drivers, enablers and obstacles to growth”.