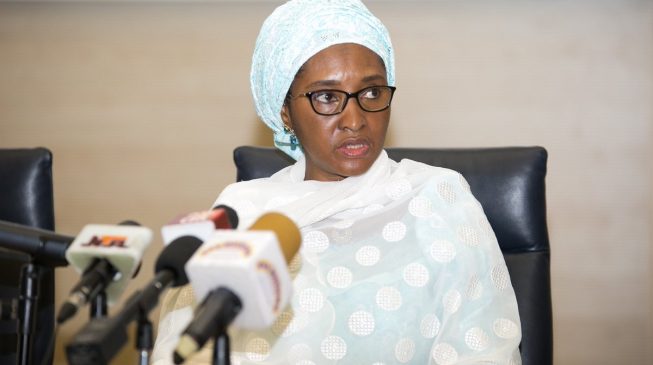 Financial Times reports that some investors are still willing to invest in Nigeria because of the high returns.
Culled from TheCable, Andrew Roche, managing director of Finexem, a Paris-based financial consulting firm, told Financial Times that the government has been using borrowed funds to patch up holes in the budget rather than investing in infrastructure.
“They have borrowed quite a bit, but where is the money being spent?” he said.
Speaking to investors at the spring meetings of International Monetary Fund and World Bank Group, Zainab Ahmed, the minister of finance(pictured), had said the country’s debt is 19% of the 2018 GDP.
However, the same presentation had shown that debt servicing now takes two-thirds of the revenue retained by the federal government after the federation account allocation committee (FAAC) shares revenues to the three tiers of government.
“The issue is not so much that interest payments are high,” Ravi Bhatia, a sovereign analyst at S&P Global Ratings, said.
“The main problem is that federal revenues as a share of GDP are just very low. They are literally reliant on oil and little else.”
The IMF had recommended a revenue-based consolidation that will lower the ratio of interest payments to revenue and said non-oil revenue mobilisation should be the top priority.
However, talks of an upward review in value-added tax have met resistance.
“The economy is suffering, so to slap on another tax will not be very popular,” Bhatia said.
“Hence the reluctance in pushing it through. Essentially, [President Muhammadu] Buhari is not a big reformer — he’s a slow-moving, cautious reformer, if at all.”
Charles Robertson, the chief economist at Renaissance Capital, says any emerging economy needs electricity, adult literacy and investment to develop a large manufacturing sector.
“There are a host of reasons not to put FDI into Nigeria but unifying the exchange rates would help to normalise the country.”
He estimates that the fair value for the naira is about 440 to the dollar, and will be about 470 by the end of the year.
“The danger is that eventually, you get a huge difference in valuation where you suddenly have to halve the currency in value,” he says.
“In the long run, it’s a problem But investors are saying, ‘is this going to go wrong in a year?’ With oil at more than $60 a barrel, they feel the answer is no.”