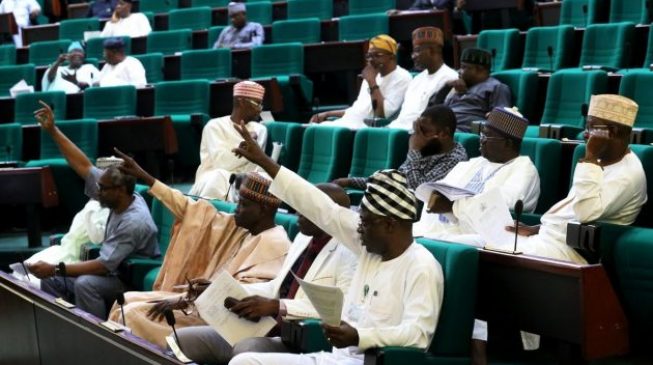 A house of representatives panel says it has uncovered public funds outside the treasury single account (TSA) to the tune of $995.71 million.
According to Thecable, the ad hoc committee on the need to ascertain the proceeds of the treasury single account made the submission in its report considered and adopted by the house on Thursday.
According to the committee chaired by Danduram Abubakar, federal government funds to the tune of “billions of naira and hundreds of millions of dollars” were operated outside the TSA by the ministries, departments and agencies (MDAs) in collaboration with banks.
The report obtained by PUNCH read: “After the meeting with Deposit Money Banks, the Central Bank of Nigeria, the Office of the Accountant-General of the Federation, the Office of the Auditor-General of the Federation and the Nigerian National Petroleum Corporation on August 15, 2017, the committee discovered that over $900m is still being held outside the TSA.
“While some banks fully complied with the directive of the ad hoc committee by remitting these funds into the TSA, it is worthy of note that the sum of about $995.71m was still held outside the TSA by some other banks. This sum of $995.71m includes the principal deposit and the accrued interest on the deposit. Also discovered was an amount of N1.207bn and €23,704.01.”
The committee also accused the NNPC of extra-budgetary spending. It said while (its) Brass LNG “received an appropriation of $511.60m, the actual release was $461.54m during 2012-2017 fiscal years.”
The lawmakers specifically indicted the corporation and an agency of the federal ministry of environment of violating the TSA policy.
They said the balance in the CBN joint venture account as reported by the NNPC, dated October 30, 2017, stood at $188,900,383.49, adding: “These are the various accounts classified as accounts still not being moved to TSA by CBN, DMBs account.”
The report further read: “The committee discovered three accounts held by the NNPC in Aso Savings and Loans PLC and Unity Bank PLC. The accounts include two placement accounts called NNPC PFL Placement Deposit and the third account called NNPC Pension Fund account. The total balance in these accounts as of August 27, 2017, stood at N1, 079,444,746.49.
“The committee also made another startling discovery of a fund held in another DMB by the Federal Ministry of Environment; Hydrocarbon Pollution Remediation Programme called FME HYPREP Account. The balance in this account as of September, 2018, stood at N1.1bn and $4.9m domiciled in Stanbic IBTC Bank.”
The committee said some of the MDAs operating accounts outside the TSA claimed to have obtained a presidential exemption over their actions.
“In the case of NNPC, the committee insisted to sight the purported exemption letter. However, to the dismay of committee, the letter was only conveying the approval of the President signed by an assistant director,” it said.