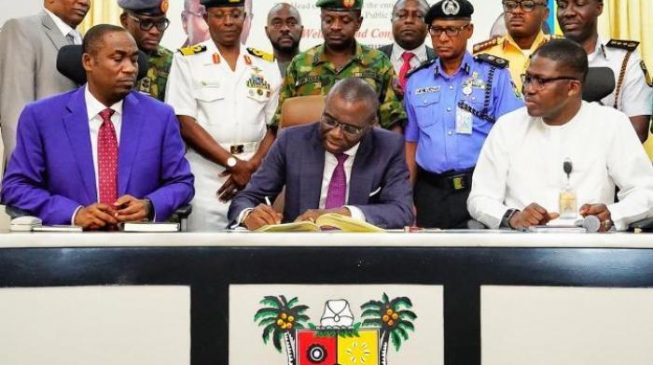 Babajide Sanwo-Olu, governor of Lagos state, has signed an executive order to address issues of traffic control, potholes and sanitation in the state.

According to a statement issued by Toro Oladapo, director, public affairs in the state ministry of information, “the order is to also ensure the attainment of zero tolerance for environmental abuse, including illegal and indiscriminate dumping of refuse and construction of structures on drainage points and setbacks”.

TheCable reports that Sanwo-Olu also ordered the Lagos state public works corporation to commence patching and rehabilitation of bad roads across the state.

He had earlier said he would solve the Apapa gridlock within his first 60 days in office.

“I think we have to make some points about issues that happen around transportation, potholes on our roads, blockages and rest of it, I think its something we need to tackle immediately,” Sanwo-Olu said.

“Lagosians are not going to wait for us any longer to maintain orderliness on our roads hence, I have invited all the Security Chiefs to witness the signing of the Executive Order so that they can hear us and support us in this regard.”

He also directed the office of drainage services in the ministry of environment to commence immediate cleaning of all secondary and tertiary drainage systems across the state to ensure the free flow of rainwater during the rainy season.

The governor said the environmental sanitation corps had been directed to address the issues in the executive order by not necessarily arresting people but engaging them in effective communication on the need to ensure compliance with the environmental laws.

“Environmental offenders are not meant to be arrested, but communicate with them; the one that we need to reprimand, let us reprimand, the ones we need to advise, let us advise,” he said.

“The people that need to be reformed, reform them,’’ he said, explaining that it is when all these had been done that the law can be implemented fully.”

Adewura Bello, a 26-year-old resident of Gowon estate, Egbeda, fell victim to the poor drainage system in the state after she was swept away by flood, while on her way home from work on May 22.

Her corpse was found in a canal days after she was declared missing by her family.