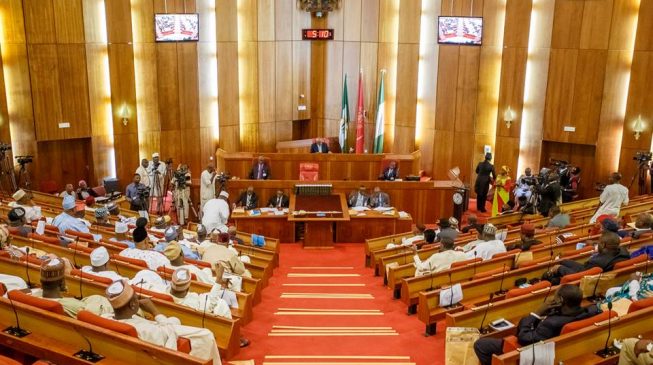 The senate has confirmed Godwin Emefiele for a second term as the Central Bank of Nigeria (CBN).
TheCable reports that the senate confirmed Emefiele’s second-term reappointment by President Muhammadu Buhari at plenary on Thursday.
On May 9, Buhari had sent a letter to the senate informing them of his decision to renew the banker’s tenure.
By the CBN Act, the senate must confirm the nomination before it can take effect.
Lawmakers had instructed the committee on banking, insurance, and other financial institution to summit a report on the renewal of Emefiele’s tenure as CBN governor.
The committee was led by Rafiu Adebayo, senator representing Kwara south.
Confirming the renewal, Senate President Bukola Saraki said: “On behalf of the senate, let me congratulate the governor of the central bank, Mr Godwin Emefiele on the renewal of his appointment.
“We wish him a useful tenure and may he use this opportunity to continue to provide support to ensure that the economy of our country continues to improve and address the important area of ensuring microeconomic stability.”
The committee was dissolved after the renewal.
Emefiele was first appointed in 2014 by former president Goodluck Jonathan and was retained when Buhari came to office in 2015.
This is the first time since 1999 that any CBN governor would get a second term.