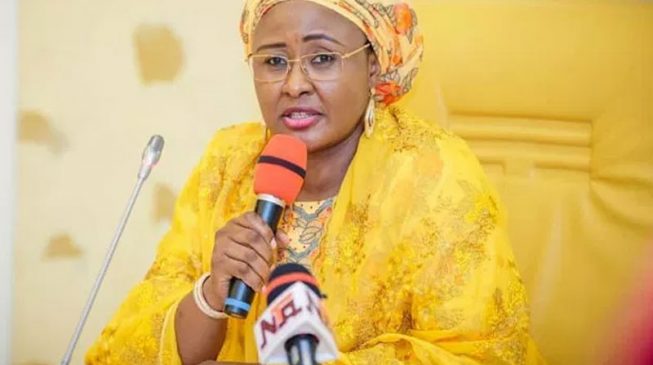 Aisha Buhari, wife of the president, says the social investment programmes (SIP) coordinated by Maryam Uwais, special adviser to the president on social investment, failed in the north.
Speaking at an interactive forum at Aso Rock on Saturday, TheCable reports that the president’s wife said she was told that 30,000 women from Adamawa would benefit from the programme but nothing of such happened.
Making specific reference to Uwais, the president’s wife said she was sure that the huge role Kano played in bringing her husband to power in 2015 influenced the appointment of the wife of the former chief justice of Nigeria.
Uwais is from Kano, which gave President Muhammadu Buhari the highest number of votes in 2015.
“Concerning the N500 billion voted for SIP, that was part of 2015 campaigns where they promised to give out N10,000, feed pupils in primary schools and give N5,000 to the poorest of the poor,” she said.
“The SSA to the president on social investment is a lady from Kano and I’m sure that my husband decided to put somebody from Kano because of the population and political impact it made. I have never asked how the money is  used or being given out.
“I met one of the president’s aides on SIP once and he promised me that for my state (Adamawa), N10,000 each would be given to 30,000 women but up till now, I haven’t heard from him.
“I don’t want to raise alarm that my state did not benefit from it. That’s where the secretary to the government of the federation is from. I kept quiet because I didn’t want people to say that I talk too much. Recently I saw a 74-year-old man selling petty things in Kano, I asked him how much is his capital, he told me between N3,000 and N4,000… Don’t forget that we have campaigned to give the poorest of the poor, N5,000 every month .
“So, I don’t know where the social investment worked. Maybe it worked out in some states. In my own state, only a local government benefited out of the 22 LGAs. I didn’t ask what happened and I don’t want to know but I can say it failed woefully in Kano. We have a lot of women who do business locally due to the cultural thing in the north, they are at home doing their businesses. Some are millionaires, some have thousands of naira, they need the assistance but they did not get it. Most northern women do not belong to any market association
“I was expecting that N500 billion to be utilized in different methods in the north for the aim to be achieved. I don’t know the method they used but most of the northern states did not get it.”
She also expressed reservations on the $16 million counterpart fund expended on mosquito nets.
“I have heard about mosquito nets, Nigeria paid its counterpart fund, $16m. I asked them to give my own share of the net to send it to my village people, I didn’t get it,” she said.
“They spent, $16 million buying mosquito nets, I did not get it, maybe some people have it. But I feel that $16 million is enough to fumigate mosquitoes all over Nigeria. That’s my opinion.”
The wife of the president also said Buhari had approved N12 billion for the treatment of trauma cases across the country.
“Over N12 billion has been released by the president to take care of trauma cases in across the country. Can you please monitor the money? The ministers are going very soon and the money has been released,” she said.