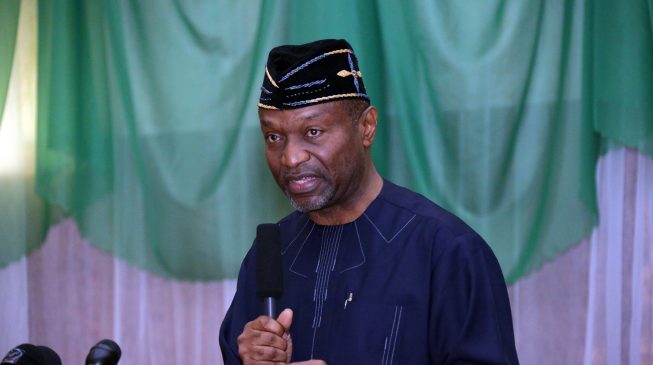 Udoma Udo Udoma, minister of budget and national planning, has inaugurated a 15-member governing board for the National Bureau of Statistics (NBS).
TheCable reports that this inauguration is taking place 20 days to the end of President Muhammadu Buhari’s first term and Udoma’s tenure as minister if he is not re-appointed into the cabinet.
Speaking at the ceremony, which held in Abuja on Thursday, Udoma advised the new board to work in harmony with the management of the bureau to achieve its goals, especially considering the important role that the NBS plays in nation building
He said strict adherence to statutory provisions by both parties will prevent bickering and other unhealthy occurrences.
He emphasized that the appointment of the Board members is on a part-time basis.
“You are required to work with the management of the NBS to, inter alia, determine its mission and long-term strategy roles and responsibilities and develop strategies to promote sustainable and cost-efficient activities of the Bureau.”
Apart from the NBS, the other two parastatals are the National Institute for Social and Economic Research (NISER) and the Centre for Management Development (CMD).
The governing boards of the two institutions were inaugurated on March 8, 2018.
In 2018, the president had approved the constitution of the boards of some federal government agencies to provide proper governance and oversight structure for them as well as drive general policy formulation for the implementation of their management teams.
While the boards of other parastatals were immediately inaugurated, that of NBS, which requires Senate confirmation, was postponed to await that confirmation. The approval was obtained recently.
The 15-member governing board comprises six political appointees and nine institutional members. Yemi Kale, the statistician-general of the federation will serve as secretary.
The other members are Moses Imokhai Momoh, Adam Modu, Akinola Idowu Bashiru, Paul Nwafor Chukwudi, Wallijoh Danladi Ahijoh.
The institutional members are minister of budget and national planning, governor of the Central Bank of Nigeria, minister of finance, minister of education, minister of agriculture, group managing director of NNPC, president of the Manufacturers Association of Nigeria (MAN), president of the Nigeria Statistical Association and the CEO of the NBS.