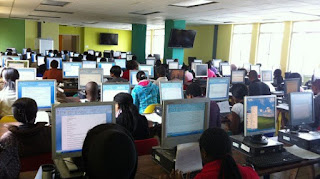 The Joint Admissions and Matriculation Board (JAMB) has delisted 76 computer-based test (CBT) centres over various infractions during the unified tertiary matriculation examination (UTME) which held between April 11 and April 18,TheCable reports.
Is-haq Oloyede, JAMB registrar, made this known while speaking at the 23rd annual seminar of the Nigerian Academy of Education in Abuja.
He did not give details of the affected centres.
Oloyode added that the board has appointed a senior advocate of Nigeria (SAN) to prosecute over 100 candidates placed in various police cells across the country for alleged examination malpractice.
He narrated how closed circuit television cameras exposed some of the candidates who cheated during the exam.
Oloyede described a form of malpractice caught on camera as “malpractices by substitution”, narrating how professional writers hid in toilets and later replaced the UTME candidates who pretended they went to the toilet to ease themselves.
“Today, we have no fewer than 100 in police cells across the country who were caught for examination malpractices,” he said.
“I have appointed a senior advocate of Nigeria who is a former solicitor-general to help me oversee all these so that the suspects can be brought to book. My director of legal matters asked me, ‘what offences should we charge these people for; for multiple registration?’
“And I said, why can’t we go to the Examination Malpractice Act?  So, my problem has started by having to draft the charges, despite the fact that we have evidence against them.
“We see a lot. But we have problems. If I were to be punishing every member of staff of JAMB that is committing infractions, I will not focus on the assignment. I will be going from one disciplinary committee to the other and my attention will be diverted.”