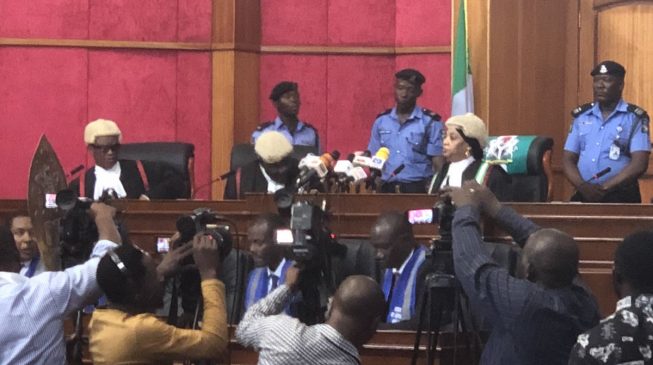 Speaking during its inaugural sitting on Wednesday, Zainab Bulkachuwa, president of the court of appeal, said actions will be taken against offenders.
In a report on TheCable, Bulkachuwa lamented the practise of analysing court proceedings on social media and making a verdict while the court has not made a pronouncement.
She said litigants in the pending presidential election petitions before the tribunal will have equal chance to argue their case.
“Any breach will not be condoned and we will not hesitate in taking necessary action against such offenders,” Bulkachuwa said.
“We assure all stakeholders that each litigant will be given equal opportunity to present his case in a mature manner before us.
“We are witnesses to what has been happening in high-profile cases where such cases are being discussed and publicly decided prematurely in both the social and electronic media before the announcement of the verdict by the court.
“We pray that this time would be an exception for the benefit of the nation. We don’t expect counsel to any of the parties to hype the polity after any sitting by making a public analysis in the media as to what transpired in court.”
She urged the parties, lawyers, public commentators and journalists to refrain from public discourse of the proceedings until the tribunal pronounces its judgement.
“These proceedings should be treated as would any other low-profile case, where proceedings in court are not discussed publicly until a decision is pronounced by the court,” Bulkachuwa said.
“This admonition is also extended to the parties, their respective counsel and the members of the press.
“We, on our own part, will make relevant information available as and when due.”
The tribunal will consider four petitions challenging President Muhammadu Buhari’s victory.
Among the petitions is that of the Peoples Democratic Party (PDP) and Atiku Abubakar, its candidate.