‘When did they disappear?’– Falana tackles navy over 15 detainees 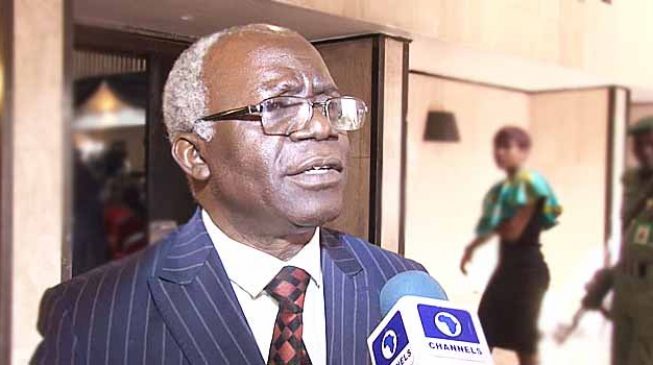 Suleman Dahun, navy’s director of information, on Monday had said that the detainees disappeared from custody.
“We don’t know where they are,” PUNCH had quoted him to have said.
The detainees, including Dada Labinjo, a navy captain, and Sherifat Ibe Lambert (also known as Mrs Bola Labinjo), a lt. commander, have been in detention since September 2018 for an undisclosed offence.
Culled from TheCable, in a statement on Wednesday, Falana asked why the navy would deny their whereabouts and yet apply to the court to continue to detain them.
“My attention has been drawn to the sadistic denial of the whereabouts of the 15 military and civilian personnel who have been held incommunicado by the Nigerian Navy since September 2018,” Falana said.
“As their whereabouts are unknown why did the navy apply to the chief magistrate’s court in Apapa, Lagos for an order to detain them? Why did the navy not deny the whereabouts of the detainees when  the magistrate ordered their immediate and unconditional release  from custody on January 7, 2019? Since the whereabouts of the detainees are not known, why did the navy file counter-affidavits in opposition to  the application for the release of Captain Dada Labinjo and Lt. Commander Bola Labinjo from further detention?
“Why has the navy filed a motion for stay of execution of the order of the federal high court for the immediate release of Lt. Commander Bola Banjo? Why did the Navy apply for an adjournment  to react to the application for the enforcement of the fundamental right of Mr. Benjamin Gold? For goodness sake, at what stage did the detainees disappear from the custody of the Navy?”
The senior lawyer also shared copies of the court documents ordering the release of the detainees.
Earlier, the lawyer had raised the alarm over their detention, calling on Abubakar Malami, attorney-general of the federation (AGF), to take action against the naval authorities over the “violations of the fundamental rights of the detainees”.
When TheCable reached out to Dahun over the issue, he only said: “I will get back to you”, but he never did and subsequently refused to comment on the matter.
Below is a list of all the detainees: