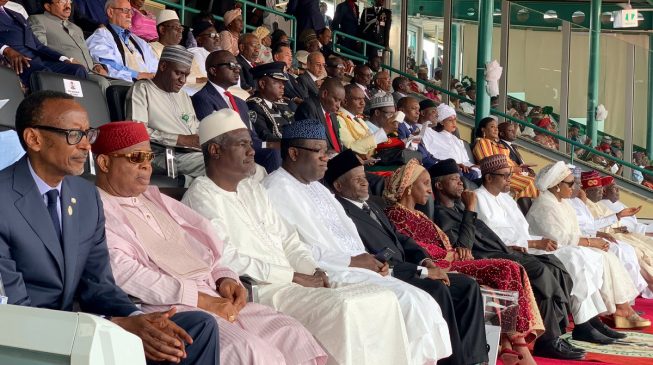 None of the former heads of state and presidents attended the Democracy Day celebrations at Eagle Square in Abuja.
The event is the first since President Muhammadu Buhari approved June 12 as Democracy Day in honour MKO Abiola, presume winner of the 1993 presidential election.
Since return of democracy in 1999, May 29 had been observed as democracy day. Although Buhari took his oath of office for his second term on May 29, major events of the programme were moved till June 12.
While Yakubu Gowon, former head of state, attended the May 29 event, he was conspicuously absent at the one of June 12.
TheCable reports that Aside Gowon, Abdulsalami Abubakar, also a former head of state, ex-Presidents Olusegun Obasanjo, Goodluck Jonathan and Ernest Shonekan, former interim president, were all absent.
But world leaders are at the event. Among them are President Mohamed Ould Abdel Aziz of Mauritania; President Paul Kagame of Rwanda; President George Weah of Liberia; President Denis Sassou Nguesso of Congo; and President Nana Akufo-Addo of Ghana.
Others are: President Macky Sall of Senegal; President Adama Barrow of Gambia; President Mahamadou Issoufou of Niger Republic; President José Mário Gómes Vaz of Guinea-Bissau and President Patrice Talon of Benin Republic.
Vice-President Yemi Osinbajo as well as Senate President Ahmad Lawan and Femi Gbajabiamila, speaker of the house of representatives are in attendance.