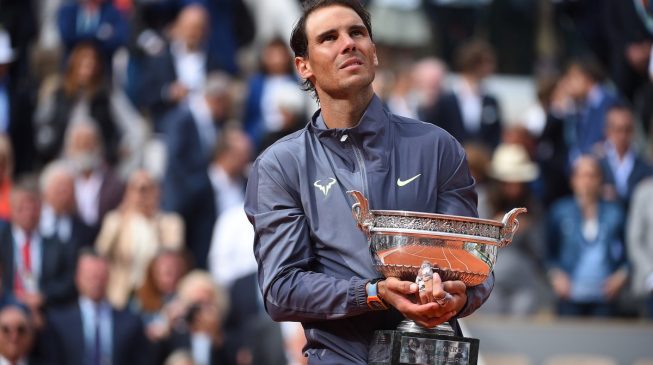 Rafael Nadal, the Spanish tennis player, cemented his status as King of Clay with his 12th French Open title at Roland Garros, defeating Austria’s Dominic Thiem in four sets of 6-3 5-7 6-1 6-2.
According to TheCable, Nadal, with his latest triumph, becomes the first man to win 12 Grand Slam or tour-level singles titles at any event, with Roger Federer a distant second on eight Wimbledon Open wins, while he has also won three consecutive French Open titles for the third time.
The 33-year-old World number two tennis player, who has now won 18 Grand Slam titles, dispatched Novak Djokovic-conqueror, Thiem, in a repeat of last year’s final, making it a 4-0 record over Thiem at Roland Garros.
Nadal, donning a green top at the start, went about a high tempo in the first set, breaking the Austrian in consecutive games, and although Thiem was able to keep up with some unbelievable plays, he fell to ferocious Nadal winners to lose the set 6-3.
Number four in the men’s ATP world rankings and hailed as Nadal’s heir-apparent on clay, Thiem, looking to become only the second Austrian to win a Grand Slam tournament, held his serve in the second set and forced Nadal to two crucial errors in the 12th game to take the set 7-5.
Sensing danger, Nadal tuned up the psychological antics to make his opponent lose focus, dashing for the locker room before the third set and taking long breaks between serves, and he won the mental game, taking the first four games and closing out the third set 6-1 in just 24 minutes.
From then onward, it was a matter of when, not if, as a tired, outpaced and outfought Thiem was no match for the ferocious firepower of Nadal, who had a 24-hour rest prior to this contest compared to his opponent, with the fourth set sewn up 6-1
Nadal’s continued dominance of the French Open is all more impressive with the fact that he has won 92 of 94 games played in the tournament, and his latest triumph on the Phillippe Chatrier court means he has won all 12 finals played on his favourite clay court.