Could Prostitution Be Next to Be Decriminalized?

ALBANY — Marijuana has gone mainstream, casino gambling is everywhere and sports wagering is spreading. Could prostitution be next?

Lawmakers across the country are beginning to reconsider how to handle prostitution, as calls for decriminalization are slowly gaining momentum, culled from the New York Times.

Decriminalization bills have been introduced in Maine and Massachusetts; a similar bill is expected to be introduced to the City Council in Washington D.C. in June; and lawmakers in Rhode Island held hearings in April on a proposal to study the impact of decriminalizing prostitution.

New York may be next: Some Democratic lawmakers are about to propose a comprehensive decriminalization bill that would eliminate penalties for both women and men engaged in prostitution, as well as the johns whom they service.


“This is about the oldest profession, and understanding that we haven’t been able to deter or end it, in millennia,” said Senator Jessica Ramos, a Democrat from Queens who is one of the plan’s backers. “So I think it’s time to confront reality.”

The New York legislation appears unlikely to pass in the coming months, but the idea of decriminalization has already amassed a growing coterie of prominent supporters, suggesting that it might continue to gain traction.

The debate is unquestionably polarizing in many circles, even among advocates for sex-trafficked and abused women who fear that creating a legal path for prostitution will not eliminate, but rather actually encourage, underground sex trafficking.
And decriminalization is already facing intense pushback in state capitals from opponents who call the measures naïve and potentially dangerous.


Still, the issue has crept into the Democratic Party’s nascent presidential campaign: In late February, Senator Kamala Harris of California became the first candidate to endorse some manner of decriminalization, an idea also floated by another contender, the former Colorado governor, John Hickenlooper.

“When you’re talking about consenting adults, I think that yes, we should really consider that we can’t criminalize consensual behavior as long no one is being harmed,” said Ms. Harris, in an interview with The Root.

Supporters of decriminalization see their efforts as part of a larger, decades-long liberalization of American mores, like lifting Sunday bans on selling alcohol and legalizing marijuana. They also frame the issue as an act of harm-reduction for prostitutes and a tacit admission that modern law enforcement and age-old moral indignation has done little to stem the practice.


“We’ve learned this lesson many times with the prohibition of alcohol, or criminalization of abortion, or even the criminalization of marijuana: The black market creates dark circumstances and provides cover for a lot of violence and exploitation,” said Kaytlin Bailey, a comedian and former prostitute who serves as the spokeswoman for Decriminalize Sex Work, which was founded last year.
Prostitution is legal only in a few counties in Nevada, and even there, the brothel industry had to recently beat back a billthat would have outlawed prostitution in the state. And even the most optimistic of those pushing for changes do not believe that any state will soon fully decriminalize prostitution.

But in places like New York, where Democrats now control the State Legislature after a slew of Republican incumbents were unseated in November by Democratic challengers running on progressive platforms, there is no question that the environment has changed.
At a recent rally in Albany to repeal a statute criminalizing loitering for the purposes of prostitution, former sex workers stood next to lawmakers like Senator Ramos and Assemblyman Richard N. Gottfried, the chairman of the health committee.


Organizers of the protest cast their efforts as a civil and economic rights battle — reflecting a broader progressive passion for gay and transgender rights, as well as criminal justice reform — that was also defending the rights of minorities and illegal immigrants, and even “bodily autonomy,” the ability to make ends meet by any means necessary.

“I did not see sex as the problem,” said Jessica Raven, a community organizerand former underage prostitute who was one of dozens of sex workers who rallied in Albany in May. “I saw lack of stable housing as the problem.”

Nonetheless, some advocates for sex-trafficked and abused women characterize such efforts in New York and elsewhere as misguided. They believe that full decriminalization will create a demand that will be filled by more women.


“Prostitution is inherently violent,” said Ane Mathieson, a program specialist at Sanctuary for Families, a Manhattan-based organization that serves victims of domestic violence and is part of an anti-decriminalization coalition. “Sex buying promotes sex trafficking, promotes pimping and organized crime, and sexual exploitation of children.” 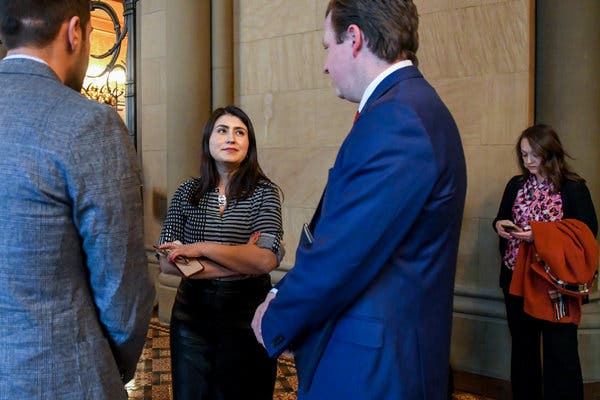 “This is about the oldest profession, and understanding that we haven’t been able to deter or end it,” said Senator Jessica Ramos, a Democrat from Queens, who supports decriminalizing sex work.CreditCindy Schultz for The New York Times

The push to present decriminalization as a civil rights issue also upset Laura Ramirez, a coordinator for AF3IRM, an international feminist group, who said she was “absolutely appalled at the fact that this is being sold as something that’s progressive.”
“This proposed legislation is the most classist, racist and absolutely obtuse legislation that we have ever seen,” Ms. Ramirez said, during a counterprotest opposing decriminalization in Albany, adding “women and girls of this state deserve better.”

Ms. Mathieson and others who work with women in the sex trade say that supporters of decriminalization gloss over a raft of gruesome details about the profession, including rape, physical abuse by clients and pimps, commonplace drug use and an often ravaging physical toll of multiple sex partners, sometimes in the span of a few hours.


“They have accepted a kind of myth about the sex industry of the happy hooker and victimless crimes,” said Dorchen Leidholdt, the head of the Center for Battered Women’s Legal Services at Sanctuary for Families in New York, adding, “It’s a fantasy perpetuated and accepted by the media.”
While decriminalization is unlikely to pass in New York this year, a pair of bills dealing with elements of prostitution appear to have a greater chance of passing, including one that would vacate nonprostitution-related crimes, like drug charges, from the records of victims of sex trafficking.

It recently advanced out of a Senate committee. A second bill would repeal loitering for the purposes of prostitution statute, a law that advocates say leads to unfair arrests of people — often transgender — for wearing skirts, carrying condoms or even “walking while trans.”
Gov. Andrew M. Cuomo, a Democrat, has offered no opinion of those bills or of decriminalization, saying only that he would review such proposals.


The United States trails many other developed countries in considering the effects of decriminalizing prostitution, which is legal in such European countriesas Germany, Switzerland and the Netherlands, and in other parts of the world.

The results of such reforms are mixed: In New Zealand, for example, which decriminalized prostitution in 2003, a 2012 study found that “the vast majority of people involved in the sex industry are better off” with decriminalized conditions. But the report also added that “many sex workers were still vulnerable to ‘exploitative employment conditions’” and that some sex workers were being forced to take clients “against their will.”
It also found, however, that “the number of sex workers, and those workers underage, does not appear to have significantly changed” because of decriminalization.

Some opponents of legalization support a form of partial decriminalization known as the “Nordic model,” or the “End Demand” approach, which emphasizes the prosecution of people who buy sex, but not those who are selling their bodies, and offers prostitutes social services instead.
Such policies have high-profile supporters like Gloria Steinem, who offered her endorsement of the Nordic model at a recent demonstration at City Hall in New York City aimed at fighting efforts in Albany.

“It is crucial to decriminalize prostituted women, men and children,” Ms. Steinem wrote in a statement read at the rally. “And equally crucial not to decriminalize the pimps and traffickers who exploit them.”
Adding to the complexities around the issue, some opponents of full decriminalization, like Sanctuary for Families, support vacating criminal records and eliminating loitering statutes, a position also held by Decrim NY, the coalition behind the broader decriminalization push in New York.


The decriminalization bills offered by lawmakers in Massachusetts and Maine would create systems something akin to the “Nordic Model,” eliminating criminal penalties for prostitutes, but continuing to criminalize sex buyers and pimps.

The Massachusetts sponsor, Representative Kay Khan, a Democrat from Newton, Mass., said her bill would not only help end the ”cycle of trauma and incarceration” but would also save the state approximately $1 million per year that could be used for services like housing.

But State Senator Julia Salazar, a Brooklyn Democrat who ran a successful insurgent campaign for office last year that included an endorsement of decriminalization, said that the “Nordic model” did not solve the problem of prostitution because it still made sex workers “complicit in illegal activity.”

“It still would not bring the industry to the surface,” she said.
Still, she added that she had been “very pleasantly surprised” by how rapidly decriminalization has elevated “in the public discourse” over the last year.


Despite some progress, legislative achievements around prostitution have often been meager. The Maine bill was declared dead in the State Senate in late May, and other recent efforts have also stalled: in 2017, for instance, the New Hampshire House of Representatives narrowly passed a bill establishing a legislative committee to study decriminalizing sex work, like the current proposal in Rhode Island. But the New Hampshire bill stalled in the State Senate amid strong opposition from Gov. Chris Sununu, a Republican.
The bill’s sponsor, Elizabeth Edwards, left office last year, but said she hopes that her former colleagues will continue to fight. “It seems like an area of policy where we could do way better,” she said.

“I wish the world knew that these are just people making money in a way that I think is a net societal benefit,” Ms. Edwards, a Democrat, added. “There are always going to be people that want sex. It’s a basic human drive. All you can do is make it safer.”