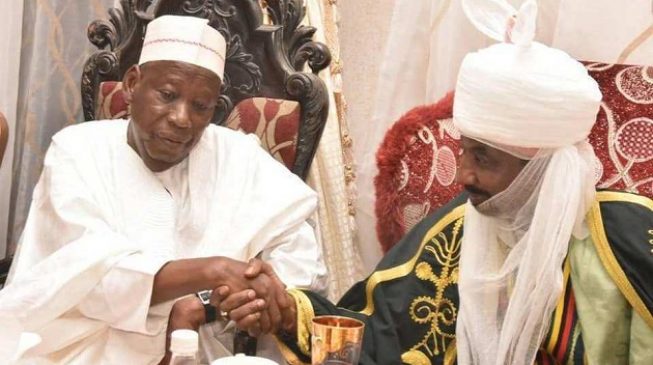 The crisis between Abdullahi Ganduje, governor of Kano state, and Muhammadu Sanusi ll, emir of Kano, has been resolved following a reconciliatory meeting between the duo.
This was contained in a statement by Abba Anwar, the chief press secretary to Ganduje, and made available to NAN in Kano on Saturday.
Culled from TheCable, Anwar said the reconciliatory meeting was initiated by Aliko Dangote, Africa’s richest man, and Kayode Fayemi, governor of Ekiti state.
He said after the meeting, the duo exchanged pleasantries with each other in Abuja on Friday.
“As the two leaders met, they congratulated each other for the successful completion of the Ramadan Fast and the Eid-el-Fitr celebration,” the statement said.
“Both leaders spoke and urged all Muslims to continue with the good teachings and spirit of the Fasting period of the Month of Ramadan.
“Emir Sanusi seized the opportunity to congratulate Gov. Ganduje for the victory in his second term in office. He also wished the governor successful tenure in office.”
According to the statement, the two agreed that “for healthier relationship between the two institutions of government and Kano Emirate Council, the dialogues will continue.”
Ganduje had recently split the emirate into five, stripping Sanusi of the control of 34 local government areas. The governor is believed to be getting back at Sanusi who reportedly worked against his reelection.
The office of the secretary to the state government (SSG) had issued a query to Sanusi on behalf of Ganduje.
The query was on alleged financial misappropriation of  N3.4 billion under Sanusi, between 2014 and 2017, following a recommendation by the Kano State Public Complaints and Anti-corruption Commission that the emir be suspended.
The duo were spotted shaking hands at the eid praying ground in the ancient town on Tuesday.