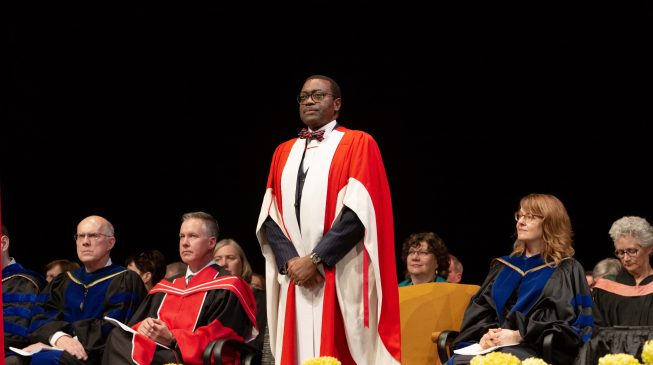 A senior official from the “Office of the Chancellor and Senate” called my office line in February 2019 and recorded a voicemail. I was working from home but thankfully, our voicemails were delivered via email. I knew that news from that level of administration to an individual faculty member was relatively rare. I thought it had to be spectacularly good news or really bad news. The human mind’s capacity to wander was immense. “’Jesu’ (Jesus), what did I do?” I did not have to wonder for too long. I listened to the message and realized that an email had been sent as well. There was clearly a level of urgency. The Office of the Chancellor and Senate was simply conducting research on Dr Adesina, who was being considered for an award. They were seeking “some thoughts on the context and impact” of the work of Dr Adesina in Nigeria and with the African Development Bank. I said to myself “thank you, Jesus”. Of course, that was not just for Dr Adesina.
I was informed that Dr Adesina was not aware of the nomination. I responded stating what I knew about Dr Adesina’s public service. Among other things, I informed the university that Dr Adesina laid the foundations for and spearheaded significant positive changes in Nigeria’s agricultural sector as minister. The results produced by the ministry of agriculture under Dr Adesina’s leadership was one of the success stories of the Goodluck Jonathan presidency. Adesina was definitive proof that the intelligentsia needed to get involved in public service in order to contribute to the development of Africa. 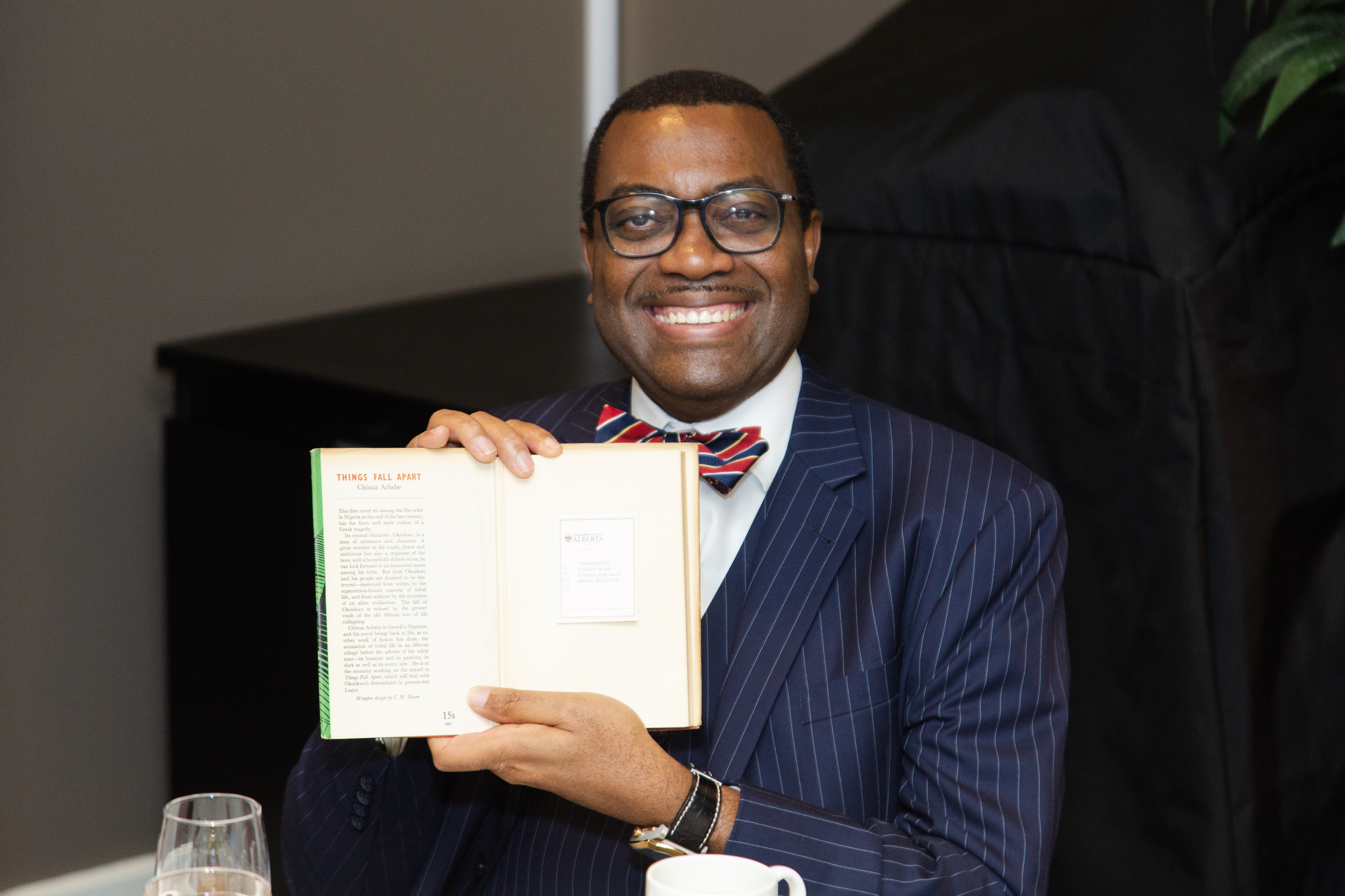 Adesina displaying a copy of the first edition and first print of Chinua Achebe’s Things Fall Apart released in 1958. The university gave him for his eyes only. PHOTO: Ayekpa Tayoro/African Development Bank Group

I returned to my usual routine and forgot about the matter. I saw the list of honorary degree recipients three months later. I was delighted but not surprised that Dr Adesina was selected after the rigorous process.  I contacted the Office of the Chancellor and Senate to get a sense of Dr Adesina’s itinerary. I did not have his contact information, as I had never met him. The plan was to get together with some colleagues and friends to host a private dinner in Dr Adesina’s honour. My house was modest but might do. I soon realized that the official activities were already quite hectic and it would not be fair to add another event. My colleagues, friends and I would instead take part in the official activities.

Convocation ceremonies are weeklong affairs in this part of the world. Departments and faculties take turns to have theirs with senior university officials presiding at each of the events. The result is that each person—student, parent, professor, etc. — feels a part of the arrangement. Seats are numbered; all potential graduates are seated properly and tickets obtained by students for their families and friends. It is a highly coordinated affair with a maximum length of two hours. That may be different from what some readers are familiar. Such ceremonies can be quite chaotic and stressful for graduates and families in Nigeria.

A small group was invited to the welcome luncheon in Adesina’s honour. Dr Adesina was accompanied by Professor Adebiyi Daramola, former Vice Chancellor of the Federal University of Technology Akure (FUTA), and the Dean of the Faculty of Agricultural, Life and Environmental Sciences (ALES) at the University of Alberta, Stanford Blade. Professor Blade lived in Ibadan and continues to have strong ties with the University of Ibadan. He is a long-term friend of Dr Adesina. Adesina was introduced to the Lieutenant Governor of Alberta, Lois Mitchell, Chancellor, Douglas R. Stollery and President and Vice Chancellor, David H. Turpin and all faculty members at the luncheon.

The University of Alberta has a tradition of acquiring and presenting a rare book to each honorary degree recipient. However, the book cannot be taken away by the honoree; it is displayed at the convocation and subsequently donated to the Bruce Peel Special Collections Library of the university. The University of Alberta chose Things Fall Apart by Chinua Achebe. The university’s newly acquired copy is from the first edition and first print released in 1958. Everyone was surprised at the impressive physical condition of the 61-year old book.

The luncheon was followed by the convocation ceremony at the Jubilee Auditorium. I joined the academic platform to cheer one of our own. Dr Adesina inspired everyone at the occasion. He spoke about his humble beginnings and attending high school in the village instead of the city. His father — certain of the quality of his son — wanted to ensure that he knew what to do to assist poor people whenever he had the opportunity. The experiences taught Adesina to be humble, appreciate others and put others before him.
One of the highlights of his effervescent speech was a story from his father-in-law about a community of frogs. The frogs were interested in climbing a pole. It seemed beyond their capacity. Several frogs climbed the pole while many others remained on the ground. Those on the ground discussed the dangers of climbing the pole and were concerned that those climbing might fall and die. They shouted that all the frogs on the pole should get down before climbing too high so as not to fall to their death. All the frogs obeyed the advice except one. The frog that made it to the top of the pole finally returned unharmed to the ground. The community asked the frog why it had refused to listen to their advice. It turned out the frog was deaf. The moral? According to Adesina, “you cannot be discouraged by words you did not hear”. 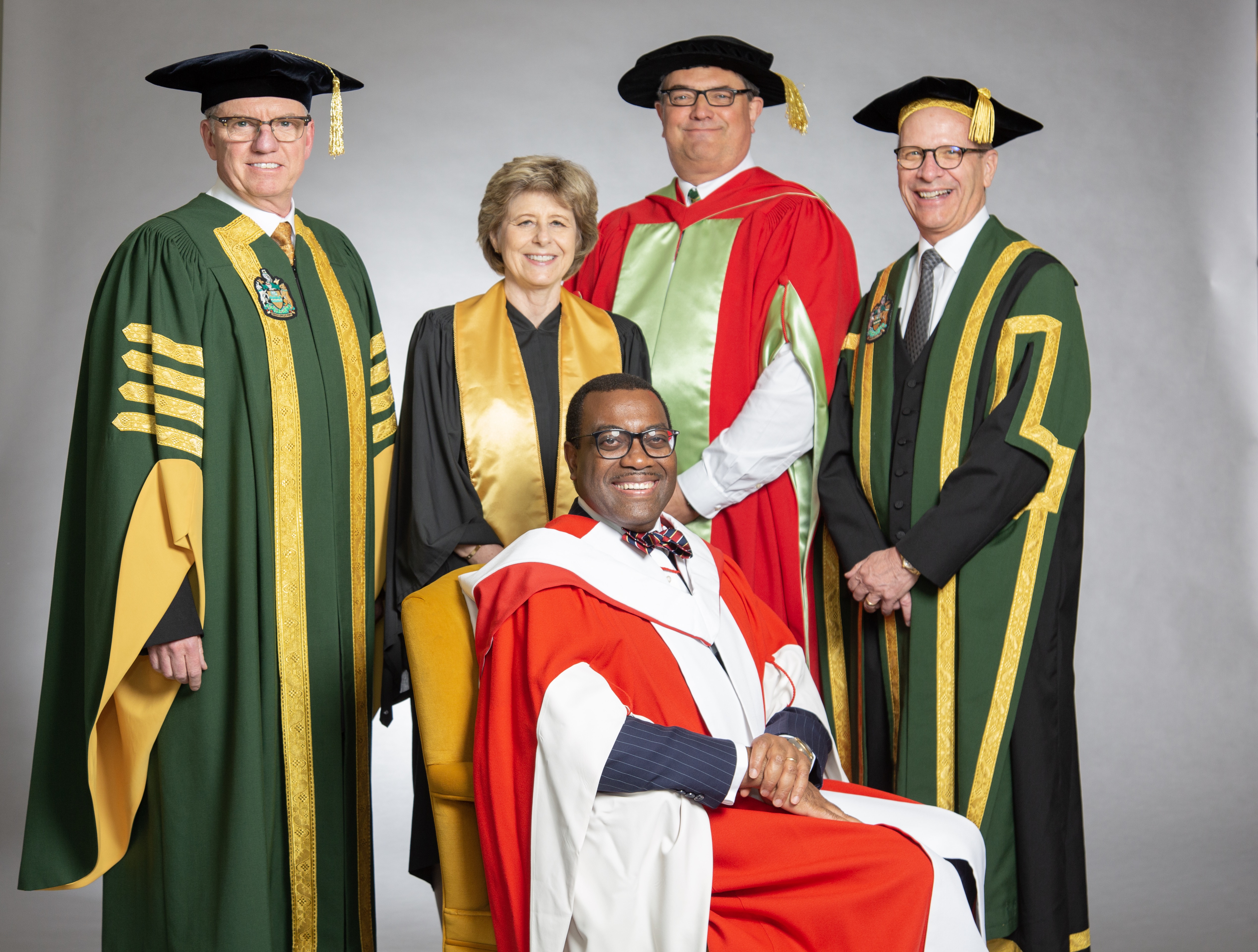 PHOTO: Ayekpa Tayoro/African Development Bank Group
There was an informal gathering later in the day at Telus Centre. Dean Blade moderated the chat. Several people from the academic and Nigerian community attended. Adesina spoke about being unable to get into the medical school despite his father’s insistence. Adesina’s father filled his university application forms. He consistently selected for his son medicine as first choice, veterinary medicine as second choice and dentistry as third choice. Adesina performed well in his exams but was told at least on two occasions that his grades were not sufficient to get into medical school. The admission officers often offered agriculture. His father concluded “God must want you in agriculture”. Adesina became an agricultural economics undergraduate and soon led the class.

Adesina’s Dean at the University of Ife told him that he could transfer to the medical school because of his high grades. He went to the medical school to see things for himself before making a switch. Unfortunately, the first room he entered was the cadaver room. There were dead bodies everywhere. He said he realized he “liked to deal with living things” and not dead bodies. That was how he remained in agricultural economics.

Adesina went to the US for graduate studies. He wrote to his father after his doctoral graduation at Purdue University. He informed his father he had completed his doctoral work and signed off with “Your son, the doctor”. His father got his revenge many years later when Adesina’s son graduated from medical school. Adesina ensured his father attended the occasion to see his grandson become a medical doctor. As they were taking pictures, the grandfather called out “doctor”. Dr. Adesina thought his father was calling him. However, the elder Adesina said “not you; I mean the ‘real’ doctor”. 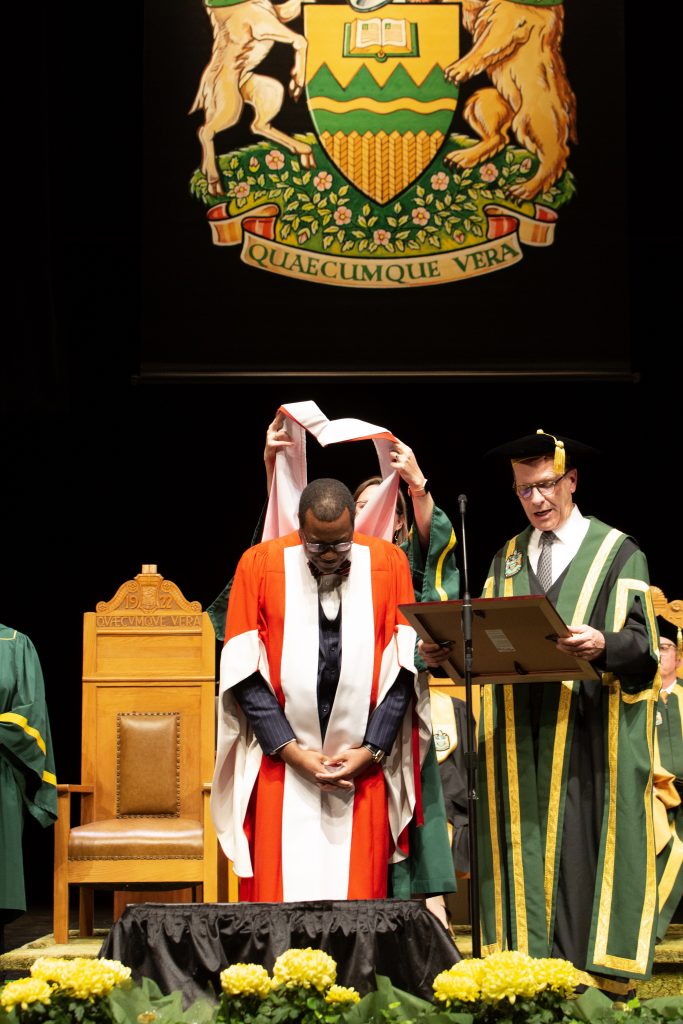 PHOTO: Ayekpa Tayoro/African Development Bank Group
On a more serious note, Adesina offered a glimpse into how he changed Nigeria’s agricultural sector. He realized the pervasiveness of corruption in seed and fertilizer distribution and was determined to effect change. Dr Adesina went to President Goodluck Jonathan and informed him that he would resign as minister of agriculture if he were unable to stop the racketeering. However, that would come at a political cost to the president because there were many powerful rent-seekers in the system. He told the president that he would “not only step on people’s toes but needed to walk on people’s heads” to change things. President Jonathan agreed to Adesina’s plans for an e-wallet program to cut off intermediaries from fertilizer distribution and send vouchers straight to the phones of farmers. Adesina emphasized the need to change farming from a way of life to a business.

A first-class agricultural economics graduate of the University of Ife (now Obafemi Awolowo University), Akinwumi Adesina won an award for outstanding PhD dissertation at Purdue University. He served as Vice-President (Policy and Partnerships) of the Alliance for a Green Revolution in Africa (AGRA) and worked with the Rockefeller Foundation in New York, in various capacities. One of those was Regional Office Director and Representative for Southern Africa. Adesina is a highly decorated global leader. Entrusted in 2010 alongside 16 others to lead efforts towards the Millennium Development Goals by Ban Ki-Moon, then UN Secretary General, Adesina was the 2013 Forbes Africa Person of the Year. Adesina joins the likes of Mother Teresa, Archibishop Desmond Tutu, Kim Campbell (19th Prime Minister of Canada), Jean Chrétien (20th Prime Minister of Canada), and Wayne Gretzky (Canadian hockey legend), among others.

Adesina stood tall but humble, regal but relatable, dazzlingly scholarly and inspiring as he accepted the highest honour of one of the most prominent universities in the world. Adesina is a pride to Nigeria and the African continent. Take a bow, Dr Akinwumi Ayodeji Adesina.

This artcle by 'Tope Oriola was first published on TheCable