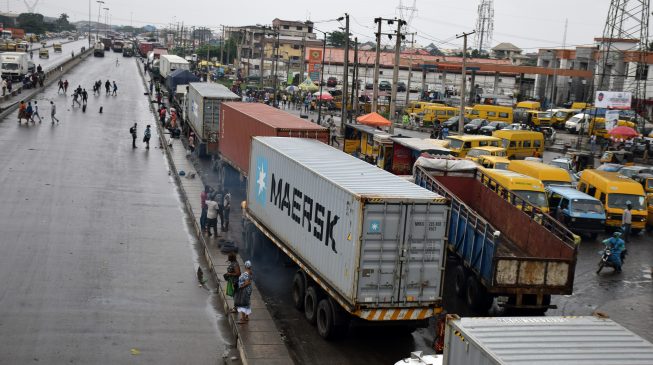 The presidential task force on the decongestion of the gridlock in Apapa, Lagos, says its operation is 95 percent complete.
Speaking with journalists at the end of a tour to wind down its operation, TheCable reports that Kayode Opeifa, vice chairman of the force, said the task was completed before its deadline.
On May 22, the presidency had set up a task force led by Vice President Yemi Osinbajo to clear up the gridlock in the area “within two weeks”.
Speaking on the operation, Opeifa said the task force initiated a strategy to redirect the flow of traffic from Costain to the Lily Pond terminal in Ijora before moving to Apapa based on a manual call-up system.
“The manual call-up system was designed as an immediate solution but the ultimate aim is to achieve an electronic call-up system,” he said.
“The electronic call-up system is being designed by the Nigeria Port Authority (NPA) and it will be functional as from August, 2019.
“With the ongoing reconstruction of Creek road, it will eventually become six lane with two lanes dedicated to trucks. We have held meetings with APM Terminal. Their facility can only accommodate 300 trucks Tin-Can can take 1000. We identified about four other parks and their are other private own parks. We are working on how to put all into use.
“The reconstruction of Tin-Can to Oworonshoki expressway has been awarded. In a few days time, work on that axis of the road will commence. The contractor has asked that trucks be made to leave the area before they can begin. Effort is on to remove the trucks and ones that is done, work will begin.”