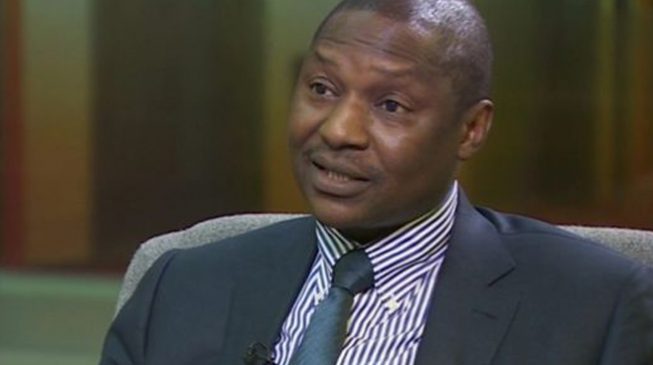 The disciplinary panel of the Legal Practitioners Privileges Committee will on June 14 quiz Abubakar Malami, immediate past attorney-general of the federation, over a “prejudicial statement” made against Sambo Dasuki, former national security adviser, TheCable reports.

The panel is to among other things quiz Malami over a reported claim that Dasuki is instrumental to the death of 100,000 people as well as the continued detention of the former NSA against court orders.

The hearing notice with reference No: PET/LPPC/23/2018 and signed by Patricia Orhomuru, the committee’s secretary, was obtained by PR Nigeria.

Dasuki’s family had petitioned the Nigerian Bar Association (NBA), asking it to investigate the former minister for his “unprofessional conduct and utter disregard to the rule of law”.

In an interview with the Voice of America (VOA) Hausa Service, Malami had said Dasuki would not be released despite all subsisting court orders for his release.

He had said: “Remember, we are talking about a person who was instrumental to the deaths of over 100,000 people. Are you saying that the rights of one person are more important than that of 100,000 who lost their lives?”

In the petition to the NBA, Dasuki’s family accused the federal government of resolving not to comply with any court order admitting the former NSA — detained since 2015 for alleged diversion of public funds — to bail.

The petition signed by Bintu Dasuki, his wife, among others, narrated how the ex-NSA’s ordeal started when Buhari’s government came on board, with the invasion of his houses in Abuja and Sokoto.

The petitioners said previous conditions for Dasuki’s bail had been met while the warrant for his release had been served on all “relevant parties”, including Malami, for compliance.

It asked the NBA to invoke laws on professional code of ethics against Malami, investigate him and “impose deserved disciplinary sanctions against him in order to safeguard the rule of law for the country.”