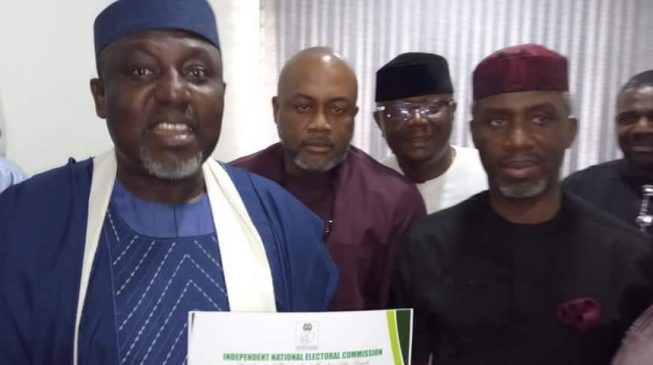 The Independent National Electoral Commission (INEC) has issued a certificate of return to Rochas Okorocha, senator-elect of Imo west.
In a statement on Tuesday, TheCable reports that INEC said it issued Okorocha the certificate in compliance with the  directive of a federal high court in Abuja.
The commission had refused to issue the certificate to Okorocha who was declared winner of the poll. The returning officer for the election was quoted to have said that he declared the former governor winner under duress.
While the federal high court in Abuja ordered it to issue Okorocha his certificate of return, two other courts in Imo state had asked INEC not to recognise him as the senator-elect.
INEC had earlier expressed reservations over the court directive to issue Okorocha a certificate of return.
It had said: “If electoral impunity is allowed to flourish, any individual can harass, intimidate and put the Commission’s officers under duress, procure a favourable declaration and be rewarded with a certificate of return.”
Earlier in the day, Okorocha was denied accreditation when he arrived the National Assembly Complex for inauguration of lawmakers.
In the statement issued by Festus Okoye, its director of voter education and publicity, INEC said the two court orders asking it not to issue any certificate of return to Okorocha were interim orders and not the final from the courts.
It, however, said while it is committed to obeying court orders, “the commission must put on record its very profound concerns about the likely consequences of this judgement for our electoral process in particular and democracy in general. Obviously, persons who seek elective offices could perceive in this judgement an irrelevance of due process and acting within the law.”