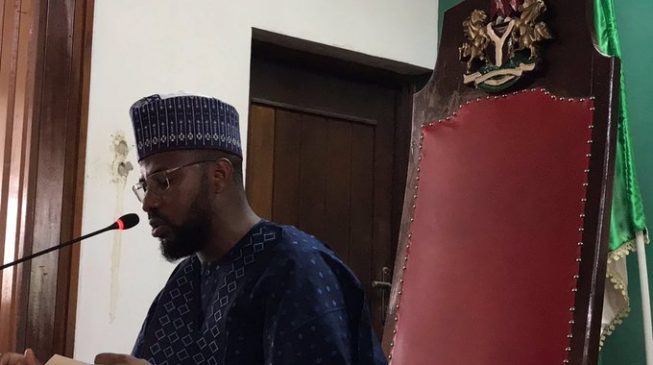 The Kaduna state house of assembly, on Friday, passed the religious preaching regulation bill.
NAN reports that the executive bill, proposed by Nasir el-Rufai, governor of the state, in 2016, was passed, hours before the eighth assembly was dissolved on Friday.
Culled from TheCable, the bill had been with the assembly for three years and had been opposed by Muslim and Christian bodies as well as individuals across the state.
The state government had in 2016 argued that the bill was meant to regulate religious preaching in order to promote religious harmony and peaceful coexistence and not to stifle religious freedom.
Aminu Shagali, speaker of the assembly, presided over the sitting during which the bill was passed after it was read clause by clause.
The bill provides for the establishment of an interfaith regulatory council at the state level and committees at local government levels responsible for screening and issuing licence to preachers.
The councils will have two representatives each of Christian and Islamic bodies among other members.
According to the speaker, the new law had mandated the council to hear and determine appeals to be brought before it arising from the decision of the local government interfaith committees.
The council also has power to issue regulations considered necessary to guide the local government interfaith committees in the performance of their functions as provided under the bill, if signed into law.
“The bill when signed into law, stipulates that in each of the 23 local government areas of the state, a committee to be known as the local government interfaith committee has to be established,” Shagali said.
“The local government interfaith committee shall consider and recommend to state interfaith regulation council all applications for the grant of licence to religious preachers as well as screen and recommend preachers for the grant of license among other functions.
“The supplementary provision provides that all cassettes, CDs, flash drives or any other communication gadgets containing religious recordings from accredited preachers may be played inside a private dwelling unit or vehicle, entrance porch (zaure), Church, Mosque and any other designated place of worship.
“It further stated that any person who plays religious cassette or uses a loud speaker for religious purposes between the hours of 11pm to 4am in a public place, and uses a loudspeaker for religious purposes other than inside Church or Mosque commits an offence and shall on conviction be liable to imprisonment for a term of not less than two years or pay a fine of not less than N200,000 or both.
“The bill also states that any person who publicly insults or seeks to incite contempt against any religion, by making false statements in such a manner as likely lead to a breach of peace, shall be punished with imprisonment for a term of not less than five years or a fine of not less than N100,000 or both.”
The new religious preaching regulation law substitutes a similar law of 1984 in the state.
The 1984 law was an edict promulgated under the military regime in 1984 to stop the scourge of violence stemming from religion in the state.
The edict was later amended in 1987, however, the law was never properly enforced or implemented.