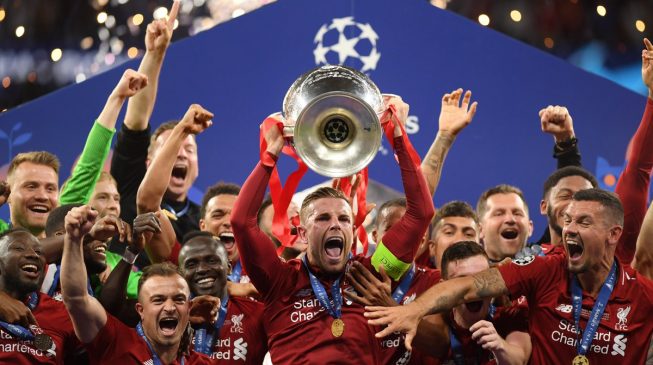 The team defeated Tottenham Hotspur with two unreturned goals to become the European champions for the 2018/2019 season.
Liverpool recorded the first goal from the spot kick when Mo Salah put in the penalty into the right side of the net after a handball. Supersub Divock Origi would seal the win with the 87-minute goal.
Liverpool were awarded the fastest spot kick in Champions League history when Sadio Mane’s cross struck the underside of Moussa Sissoko’s arm after 23 seconds at the Wanda Metropolitano stadium.
Egyptian striker Salah, who was forced off in Liverpool’s 3-1 defeat by Real Madrid in the 2018/19’s last final, smashed the ball down the middle of the goal to open the scoring.

MO SALAH: FROM MY VILLAGE TO THIS LEVEL IS UNBELIEVABLE

Speaking to BT Sport after the match, Salah said to come from his village to Egyptian capital Cairo, and then to this level is unbelievable.
“Everyone is happy now, I am glad to play the second final in a row and play 90 minutes finally. Everyone did his best today, no great individual performances today, all the team was unbelievable,” Salah said.
“We will see VAR next season, but I like it now! I have sacrificed a lot for my career, to come from a village to go to Cairo, and to be an Egyptian at this level is unbelievable for me.”
TheCable reports that the Reds set the record as the team with the most champions league title in England — with six European trophies for the club.
Sadio Mané (Senegal), Mohamed Salah (Egypt), and Naby Keïta (Guinea) are the first players in their countries to have lifted the Uefa Champions League.
This is the third Champions League final to finish 2-0, after 2009 and 2010 – the latter game was also in Madrid.
Jürgen Klopp’s men who were denied the Premier League crown, despite an excellent term finally ended the fourteen-year trophy drought.
But there was not much else Liverpool would be pleased about because it became a messy half in which Spurs passed slightly better.
Liverpool’s Trent Alexander-Arnold and Andy Robertson each came close to scoring later in the half.
Tottenham, playing in their first Champions League final, struggled to trouble Jurgen Klopp’s side’s towering defence.
It ended 1-0 at half time in favour of Liverpool.
There was a big improvement in the second half from Spurs who went gun blazing from the blast of second-half whistle.
But Divock Origi who came in for Roberto Firmino in the 58th minute finished off brilliantly into the far corner from Virgil Van Dijk’s lay off in the 87th minute to cement Liverpool’s victory.
Liverpool have now beaten Spurs thrice this season en route to finishing 28 points above them on the domestic front.